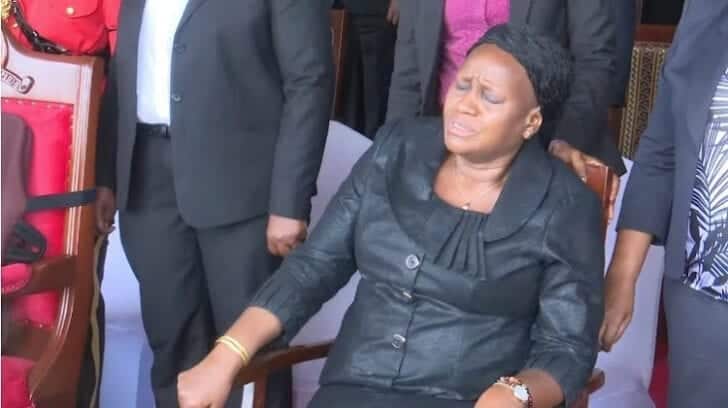 The wife of John Magufuli -Janet – was on Monday overwhelmed by emotions as Magufuli’s body arrived at Jamhuri Stadium in Dodoma for the state mass funeral.

Janet who was seated next to the Tanzanian President Samia Suluhu was seen crying uncontrollably.

As she shook her body, Janet, dressed in black, was seen being consoled at the main dias even as her husband’s body arrived.

As the crowd stood up to receive the body, Janet could not withstand it making her cry some more as she wiped her tears with a white handkerchief.

She remained seated during the playing of the East African anthem.

President Suluhu was seen stretching her hand towards Janet as she tried to comfort her in vain.

A screengrab of Janet Magufuli crying during the state funeral mass at the Jamhuri Stadium in Dodoma on March 22, 2021.

The two ladies who were beside Janet trying to consoling her were also seen fighting back tears.

President Uhuru Kenyatta is among the heads of states who are in Dodoma at the Jamhuri Stadium for the state funeral mass of Magufuli.

Magufuli leaves behind seven children and 10 grandchildren. He died of chronic atrial fibrillation, a condition he battled for 10 years.

Uhuru who doubles up as the Chairperson of the Esat African Community was accompanied by CS Adan Mohammed and arrived at the Uhuru grounds a few minutes after 10 am.

The late Tanzanian President, John Pombe Magufuli will be buried on March 26.

Today his body is expected at the Dodoma Uhuru grounds for public viewing before being moved to Mwanza on March 23.

On the same day, the body will be moved to his Chato town where his constituents will have a chance to view the body.