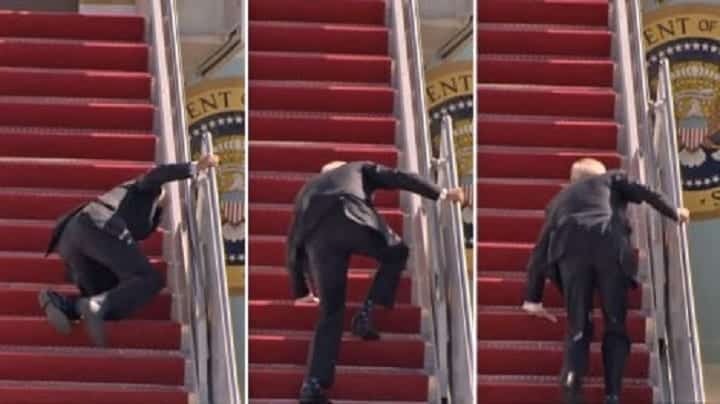 The political rivalry between the families of US President Joe Biden and his predecessor Donald Trump appears far from over.

This after Trump’s son Donald Trump Jr appeared to make fun of Biden’s fall off his official plane’s staircase on Friday.

Trump Jr. posted a video that appeared to show his father hitting a golf ball onto Biden’s head, causing him to fall.

It wasn’t the wind folks. pic.twitter.com/jYc01dBZCe

Ruto To Visit US President Joe Biden At The White House

Biden stumbled and fell not once, not twice, but thrice on the staircase of the Air Force one presidential aircraft on Friday, but his aides said he was ‘okay’.

A White House spokesperson also blamed the windy weather for the incident.

The triple stumble came as the 78-year-old President was departing for Atlanta from Joint Base Andrews in Maryland.

About halfway up the red-carpeted stairs, Biden could be seen losing his footing before stumbling three times, eventually ending up on his left knee while still holding the railing with his right hand.

The president got back up, gave his left knee a rub and ascended the rest of the staircase before turning and saluting US marines who had flown him by helicopter to the airport from the White House.

Officials insisted there was no damage done.

But Trump Jr tweeted sarcastically about Biden’s fall: “Pay no attention to the fact that the President of the United States is so frail that he got knocked over repeatedly by a gust of wind. Nothing at all to see here, folks!”

Biden defeated Trump in a hotly contested election to assume the presidency last November, even though the loser has consistently claimed he was rigged out.