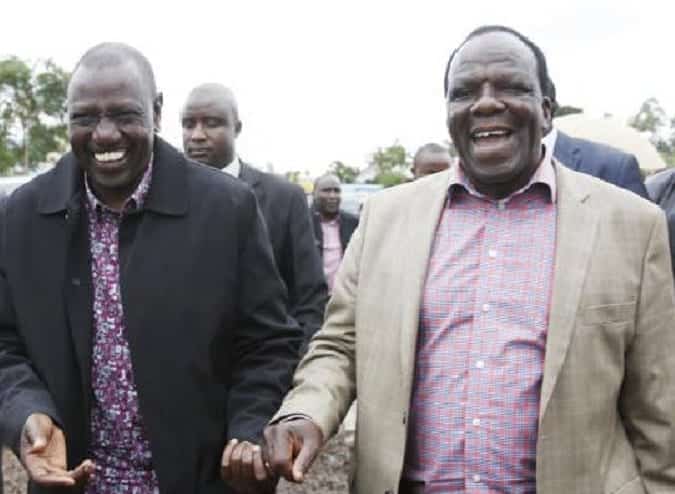 The country’s political landscape could be tipped for another major realignment after it emerged that Deputy President William Ruto met with Kakemega Governor Wycliffe Oparanya.

The details emerged just days after key regional leaders, including governors, held talks at a Nairobi hotel, triggering speculations that ODM leader Raila Odinga was building a new alliance around them.

Being Raila’s deputy in ODM, Oparanya’s meeting with the country’s second in command swirled speculations of looming political realignments.

Other key political players among them Musalia Mudavadi (ANC), Kalonzo Musyoka (Wiper), Gidoen Moi (Kanu) and Moses Wetang’ula are cobbling together a parallel coalition ahead of the 2022 polls.

The two leaders could have met as recent as Thursday in initial alliance-building talks.

However, it is not clear if Oparanya was planning to ditch ODM or he was playing a major role in the party’s possible alliance with Ruto.

There are reports that Oparanya’s secret rapprochement with Ruto could have formed part of the agenda of a meeting by a key organ of the ODM party.

“The matter came up in one of our meetings but we did not give it a lot of weight. However, we have confirmed that Oparanya and Ruto are in talks,” said a high-ranking ODM official aware of the issue.

When contacted on Thursday, Oparanya was reluctant to discuss the details of the meeting, insisting that his session with Ruto was “coincidental” and not pre-arranged.

The former influential Council of Governors chairman maintained that he was not planning to bolt out of the ODM party even as he downplayed photos of the alleged meeting as “too old”.

“Those are very old photos of about three weeks ago and have nothing to do with any talks. When people meet in a hotel it doesn’t translate into building an alliance,” Oparanya said on the phone.

“I am in ODM to stay unless Baba (Raila Odinga) moves out.”

On Thursday, undated photos surfaced showing Ruto walking with former CS Rashid Echesa in the company of Narok West MP Gabriel Tongoyo along what appears to be an expansive range.

There were reports that the meeting took place at Mahali Mzuri camp located at the heart of the vast Masaai Mara National Reserve.

In the second picture taken with similar setting while overlooking the reserve, Oparanya posed for a photo with Tongoyo and ex-Agriculture CS Mwangi Kiunjuri with a helicopter in the background.

But Echesa denied that the meeting was planned saying it was just a coincidence.

Speaking to the Star on the phone, the close ally of the DP said they were in a separate meeting and Oparanya and his team had theirs too.

“We were told Oparanya was in a different meeting with ODM team in the process we ran into each other and one of of members requested for a photo moment. Nothing else was discussed,” he said.

However, it is apparent that the country’s political landscape is likely to witness heightened political developments in the coming months.

The emergence of the One Kenya alliance amid claims its has the backing of  influential power brokers, coupled with allegations of Raila’s betrayal, could have triggered realignments in the political arena.

While Raila allies have protested against a scheme by President Uhuru Kenyatta’s power dealers to shortchange him, the head of state has moved to renew his camaraderie with the ODM boss.

He visited Raila at his Karen home last week and took him for a unity tour of the city in a bid to neutralise jitters within the ODM circles.

The move is said to have exposed cracks in the ‘deep state’, which is said to be reading from different scripts about Uhuru’s possible successor.

In a telling tweet, famed political analyst Mutahi Ngunyi posted that the law of natural selection—instead of pre-election coalitions—will be used to force a run-off in 2022.

“Two candidates will emerge. The first will be a GEMA-supported candidate (Fred Matiangi?) The second will be from the Mulembe Nation—all based on ethnic vote volume. Iko swali?” Ngunyi said.

Raila and Ruto allies had started sending feelers that the duo could work together ahead of the 2022 polls, a bid to vanquish Uhuru’s succession plans.

However, stung by the fears of a Raila-Ruto reunion, Uhuru sought to affirm his handshake with the ODM leader in a public show of rapprochement that now appears to have set Ruto into motion.

Following his bitter falling-out with Uhuru, Ruto has been alienated and is seen as walking a lonely path in his state house journey without key regional allies.

Hilarious Video:Trying To Fit A Sofa Into A Tiny car-Not Rocket science