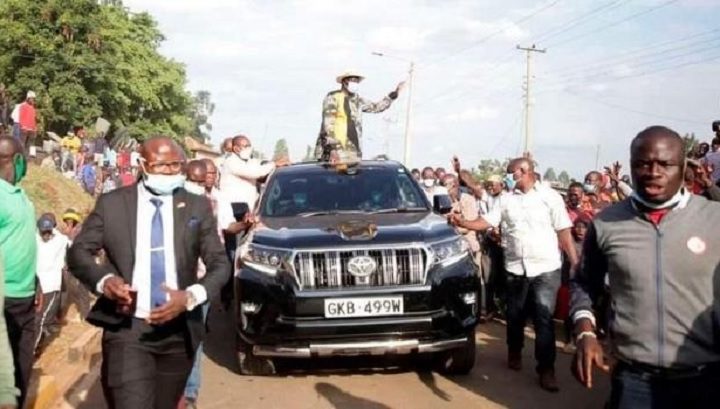 ODM leader Raila Odinga, on Sunday, August 1, toured Suna East in Migori County. His convoy caused jitters in rival camps as he made his entry aboard an official government vehicle.

A debate ensued on whether the car had been assigned to the former Prime Minister who does not occupy any government office.

Deputy President William Ruto’s ally and Soy MP Caleb Kositany alleged that the vehicle was an indication that Raila was enjoying state machinery ahead of the 2022 General Election.

Raila’s friendship with President Uhuru Kenyatta has been a contentious issue after the duo entered into a gentleman’s agreement in the famous March 2018 handshake.

However, Junet confirmed that the vehicle was indeed entrusted to him due to his status in the National Assembly.

“ODM is fully in government. Note the GK vehicle Raila is using,” Kositany argued, sparking mixed reactions from a section of Kenyans.

Jubilee and ODM stated that they were open to working together, but the former muted reports of an alleged coalition between the two.

Raila, nonetheless, hinted at running for the presidency and disclosed that the party was restrategising on how to win the General Election. In June, he stated that he was assembling heavy machinery and a formidable team that opponents would be cautious of facing.

“We are assembling a heavy [political] machine. They (opponents) don’t know what is in store. There’s a Tsunami coming. I’m urging you [my supporters] to trust me, we know where we are going,” he urged while speaking in Gem, Siaya County during the burial of former area Member of Parliament Jakoyo Midiwo.

Raila, on Thursday, July 29, met his party’s National Executive Committee (NEC) where they discussed the party’s budget and his manifesto. One major decision that was resolved was ODM’s exit from the National Super Alliance (NASA).

Political analyst and strategist, Barrack Muluka, weighed in on the debate centred around the use of state machinery and coined political philosophies ahead of Uhuru’s exit from office.

“We do not know the pact signed between Uhuru and Raila and I believe it is a little childish to focus on the same. If Raila feels that enjoying certain privileges will ease his pain of reportedly losing elections via alleged voter fraud and other election malpractices, then so be it.

“If he finds comfort and happiness in using a GoK car, then we do not need to have a conversation on that. Let us focus on what the country needs,” Muluka told Kenyans.co.ke.

Nafula Kisiang’ani, Social Development Consultant, however, opined that Raila’s close relationship with the government and enjoying state perks was a crucial strategy centred around succeeding Uhuru in 2022.

“Raila’s setback in past elections was lacking the blessings of the deep state and access to government machinery but not numbers. He has therefore strived to endear himself to Uhuru who has a vast say in the deep state,” Kisiang’ani stated on Thursday, July 29.

Uhuru, Raila and Ruto have been fighting for the common mwananchi’s vote with all camps coining strategies to woo the voters.

Ruto stated that his hustler system and bottom-up economic model had created a nationwide conversation as other leaders rushed to copy the same. However, Raila’s camp argued that the enigma’s philosophy and push for reforms have always been centred around the bottom-up approach for decades.

“Raila came up with rural electrification and was crucial in the formation of Kenya Urban Roads Authority (KURA) and Kenya National Highways Authority (KeNHA) which have been effective in development,” ODM Chairman John Mbadi defended.

Uhuru camp unveiled a new outfit dubbed Wanjiku Revolution centred to counter Ruto’s hustler system. The team’s agenda is based on showcasing Uhuru’s development and successes and also asking the citizens to pinpoint areas they need to be improved.

Uwezo Fund, Youth Fund, Cash transfer to the elderly and the Boda Boda Investment Scheme are some of the pointers Wanjiku Revolution will propagate.

“Uhuru, Raila and Ruto cannot lead a people’s movement. They are not ordinary individuals,” analyst Muluka argued adding that Kenyans were falling for tribal alignments and factions that are hoodwinking them.