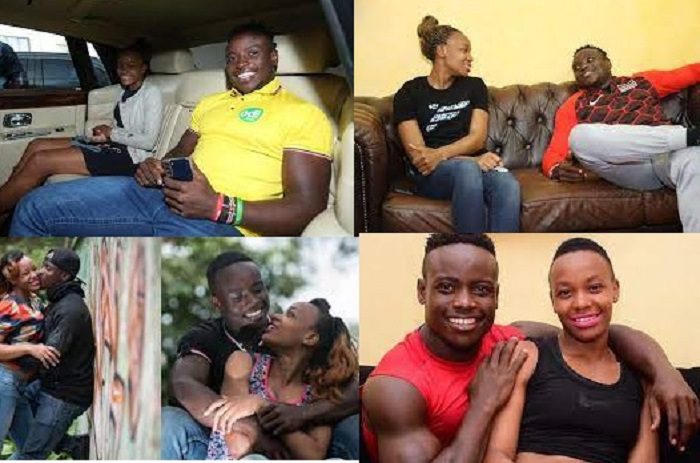 Little-Known Details about Ferdinand Omanyala’s wife Laventa Omanyala who is also an Athlete.

While most spotlight has been on him, Omanyala says there is more to his life than what fans see on TV when he takes to the track.

Over the past week, Kenyan sprint sensation Ferdinand Omanyala has been a subject of discussion in the country and across the world, after he set a new 100m record in Africa during the recently concluded Kipkeino Classic world tour in Nairobi.

While most spotlight has been on him, Omanyala says there is more to his life than what fans see on TV when he takes to the track.

Like most successful men, he has a wife who pushes and inspires him to achieve greater heights. His wife is called Laventa Omanyala.

Appearing on JKLive show alongside her husband, Laventa revealed interesting details about herself including that she is also an athlete and has been in the sport longer than her husband.

She divulged that she is a sprinter and has featured in several races with her best time being 12 seconds in the 100m dash. She also features in the long jump.

“I was already in the athletics before he came in. I have been in athletics since 2015… I am also a long jumper,” she said.

Additionally, she has worked in the medical profession and has served in renowned facilities like the Mama Lucy Hospital.

During the interview, she opened up on supporting Omanyala while he was starting off, noting that: “I knew he was going far, I saw an inspiration in him… We have our kid together.”

Explaining how she managed to pay the bills and take care of the family, Laventa said:” I got help from people. At mama Lucy I found another family, they were very helpful, we became more than friends and family, they really supported and stood with us, they gave me locums and that is how we survived.”

She is also the lead at their company ‘Track Ferdy’ that produces merchandise for the sprint sensation. Working with local talent, she hopes to grow the company into one of international repute.

Together, the Omanyala’s have been blessed with one child who is currently two years old.

According to Omanyala, back when he was starting his sprinting career, Laventa was one of the few people that believed and supported him all through. He now says he is ready and willing to “Give her anything she wants”.

Laventa has expressed her desire to dedicate more time on her athletics career next year now that Omanyala has shed the spotlight on Kenyan sprinters.

“Whatever she wants I can get. She is a sprinter so next season I want to give her everything so that she can get to her full potential too… I want to be there for her, give her all the advice. I want her to follow my steps,” she said.

Word of the Day:Speak and act upon it