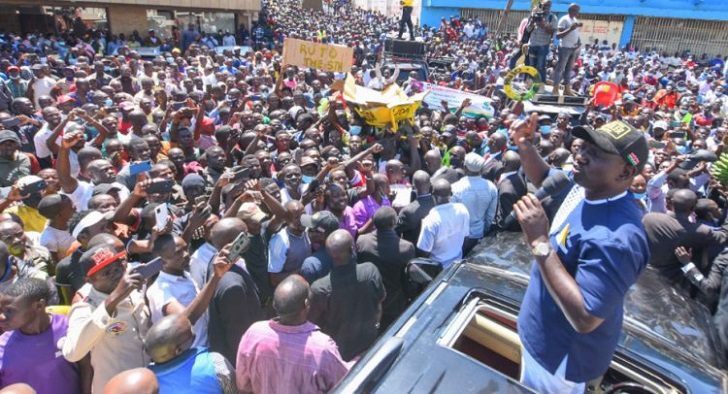 A section of the youth reportedly demanded money as they began pelting his motorcade with stones.

The DP’s attempt to explain his bottom-up economic model was futile as he was forced to cut short his speech.

Police were forced to use teargas to disperse the rowdy youth and secure the DP’s motorcade.

DP Ruto arrived in Kisumu on Tuesday, November 9, as he begins his tour of Luo Nyanza that will see him tour Siaya, Homa Bay, and Migori Counties.

The incident comes less than a month after the DP’s motorcade was pelted with stones after he toured Busia County.

Following the incident, Interior Cabinet Secretary Dr Fred Matiang’i ordered investigations into the matter after which eight individuals were arrested and will be charged with violence.

Matiang’i warned that members of the public caught propagating violence during political rallies will bear the full consequences of the law, adding that politicians will also be held accountable for the actions of their supporters.

The CS stated that any person has the freedom to campaign in any part of the country.

DP Ruto’s tour of Luo Nyanza came amid allegations that he had sidelined the region, especially after he had made numerous tours to the Kisii region which is considered a swing-vote area.

Yesterday, the deputy president met with grassroots leaders from Kisumu County where he laid out his manifesto to them and detailed his plans for the region.

The DP earlier on November 10, met with artisans and traders at Kisumu’s Jua Kali before proceeding to Kondele.

Kenyan Man accused of getting drunk on the Job in Arizona