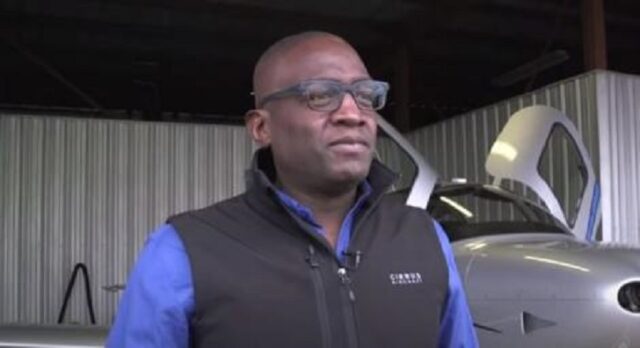 Kenyan Diaspora Captain Tom Rege is a  resides in the County of Leesburg Virginia State, USA where he works as a flight instructor, teaching minorities and women how to fly planes.

In Kenya, children of politicians in most cases have followed in the footsteps of their parents, whether through law school, entrepreneurship and business, they often take up after their old folks.

However, in the instance of Captain Tom Rege, son to former Karachuonyo Constituency Member of Parliament Engineer James Rege, the apple fell a continent away from the tree.

Rege resides in the County of Leesburg in Virginia State, USA where he works as a flight instructor, teaching minorities and women how to fly planes.

He developed a passion for planes and aviation after moving to the US with his father who was studying telecommunications engineering at the time.

When his parents decided to return home to Kenya, Rege chose to stay and pursue his dreams. He told his parents that he would put himself through aviation school.

Woman breaks up with fiancé after being offered $10,000

Today, he is a certified flight instructor and is the founder of OpenAir Flight Training as well as The Aviation Foundation.

His foundation champions the growth of the pilot community for young minorities and women.

Each year, Captain Rege participates in the Board of Aviation Expo Leesburg edition where he helps raise an average of Ksh25 Million that is channelled towards grants and funding for his students.

His flight company boasts a number of planes including a Cirrus SR20 which he uses during his training sessions. It is estimated at a cost of around Ksh65 million.

This particular 4-seater aircraft is equipped with a parachute to lower it safely to the ground after a loss of control, structural failure or mid-air collision. The SR series remains the only airplane in its class to include side-stick flight controls that combine aspects of a traditional yoke handle.

Captain Rege is an alumnus of Virginia Polytechnic Institute and State University where he pursued computer.

He believes that the key to achieving success or one’s goals is aggression.

“Be aggressive, be focused and look out for opportunities out there out there,” he previously stated.

Video:Kenyans fall victims to a string of hate crimes in US, Europe