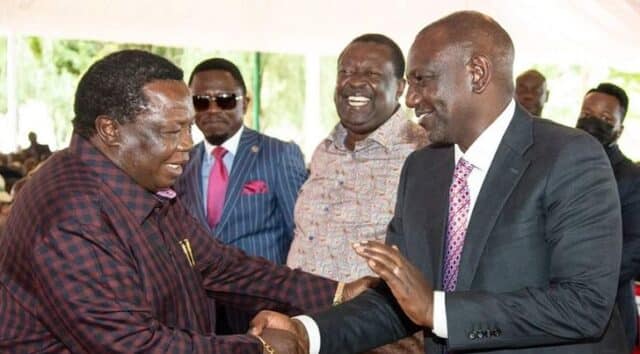 The Head of State, who is on a charm offensive two-day tour of Kakamega County, on Thursday asked leaders from the vote-rich Western region that is perceived to be his political rival Raila Odinga’s stronghold to work together with his administration.

On Thursday, Dr Ruto said the government will write off the debts of sugar factories in the region in order to revive the economy of the region.

The President also asked leaders from the region to work with him to steer the development of the region.

“There is no competition between me and the governors, MPs or MCAs. Let us all come together because our intention is to serve the common mwananchi,” Dr Ruto said.

Lurambi MP Titus Khamala, who was elected on ODM ticket, said he was ready to work with President Ruto.

“We are keen to ensure we enjoy the fruits in the State House with you,” said Mr Khamala.

Mr Atwoli said he and the President have been friends for a long time, but only differed politically since 2017.

“In the August polls, we had the President and the ‘Deep State’ but this young man trampled on us like an open maize field. You are a very tough guy. What makes anyone think that in 2027 there will be any obstacle in his re-election?” Mr Atwoli said.

He asked opposition leaders to give the President time to put a full government in place before they judge his work.

“It is too early to start judging the President over his development. Let us give him time so that we can question what he has done right and what has gone wrong,” Mr Atwoli added.

The President met leaders from the region at the Kakamega State Lodge in a meeting that brought together bitter political rivals.

Dr Ruto apologised to Mr Atwoli for hard-hitting phrases he used against the labour unionist during the campaign period and announced that he had also forgiven anyone who wronged him.

“During the campaigns, Mzee Atwoli directed my people of Sugoi to cut down trees fearing that I would commit suicide by hanging myself after losing the elections. But that was politics. I now call upon anyone I may have uttered a statement that hurt him to forgive me like I have forgiven those who said nasty things about me,” he added.

Mr Natembeya said the governors had attended the meeting to commit their support to President Ruto’s administration.

“We are here to prove our commitment to support your administration,” said Mr Natembeya.Prime Cabinet Secretary Musalia Mudavadi is tasked with the responsibility to whip the region to speak in one voice and support the President’s agenda.