Aiko Bett’s duet with her father, Richard Bett, went viral on social media in a performance that landed them an interview with renowned singer Kelly Clarkson.

The Kenyan girl did a cover of Lewis Capaldi’s hit song Someone you loved with her father in a video posted on their Instagram account.

Subsequently, the video was shared globally earning them 21 million views.

He revealed that his daughter learned the flow and the lyrics of the song on her own as he was away on official duty.

“One time, I was away and she taught herself the song. When I came back and heard the song, I told her that we needed to do the video,” he stated.

On her part, Aiko stated that she enjoyed singing, further, stating that her dream was to perform alongside Clarkson. 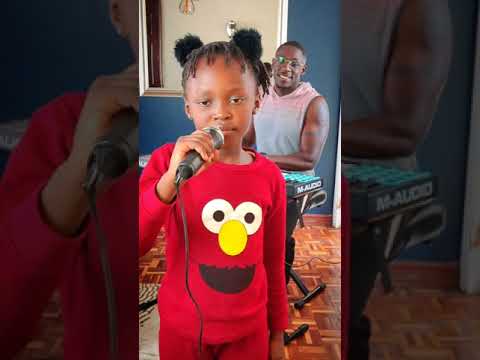 “Music makes me happy and special. I want to be a singer and do concerts all over the world,” she stated.

In response, Clarkson invited Aiko to the US to perform on the show acknowledging how talented the Kenyan girl was.

“You sing the song so well despite not living through that emotion. It just makes the lyrics stand out in such a different way.

“I do sing on the show and I want to invite you if you want to. I would love to sing with you on my show,” she stated.

Nick Jonas, who was also present during the interview, was blown away by Aiko’s performance as he encouraged her to follow her dream.

“I think you are incredible so do what you are doing. There is so much from singing with the people that you love. They will help you and you will go very far,” the artist encouraged.

Kenyan Youth Are A Good Example Of Educated Fools