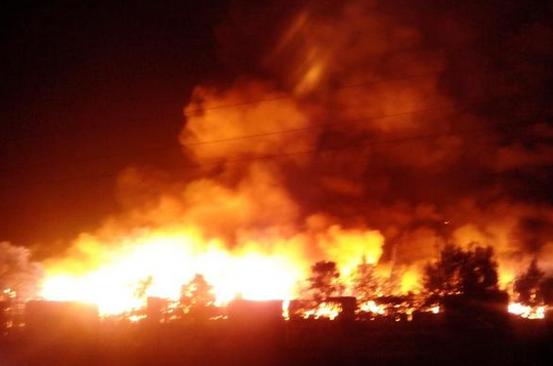 Alice Wamboi, whose daughter died when the Kenya Assemblies of God Church in Eldoret was set ablaze last year, is led away by policemen. On Wednesday, medical authorities attempted to bury bodies believed to be of those who died at the church.

Relatives later stormed the venue to stop the exercise. Uasin Gishu District Commissioner Leonard Ngaluma intervened and the bodies were returned to the Moi Teaching and Referral Hospital Mortuary.

An attempt by the Government to bury people killed in the Kiambaa Kenya Assembles of God church inferno aborted.
A team led by Chief Government Pathologist Moses Njue and Eldoret Criminal Investigation Officer Munga Nyale arrived at Kiplombe Cemetery at 10.30am with 37 bodies ready for the burial.

Under the direction of Dr Njue, 17 bodies had already been lowered into the mass grave before the process was stopped following a call from Rift Valley PC Hassan Noor Hassan.

Relatives and friends who had gotten wind of the ongoing burial arrived at the cemetery in hired vehicles. They sobbed on seeing their relatives’ last journey and police officers had to restrain them from accessing the grave.

“Kwa nini serikali inatufanya hivi? Sijashindwa kuzika mtoto wangu. Wanazika mtoto wangu ndani ya karatasi kwani siwezi kununua jeneza?” (Why is the Government mistreating us? I am not unable to bury my child. Why should they bury my child in a polythene bag? Does it mean I can not afford a coffin?” lamented Ms Alice Mumbi.

Speaking later, Njue explained that the Government was not burying the victims but preserving their bodies.

“The bodies have accrued a bill of over Sh8 million where they are being preserved. We are preserving them until DNA results are out,” explained Njue.
He added that the bodies had two tags each and had been treated with chemicals. The bodies can stay in the polythene bags for a period exceeding 20 years while in the same state.

“The amount required for the DNA is over Sh22 million and we do not know how long it will take to identify the bodies that is why we resorted to this method,” said Njue.

Mr Ngaluma explained that the burial had been called off to facilitate a decent burial in future.
The bodies were ferried back to the mortuary.
Source-The Standard

Uasin Gishu DCIO Munga Nyale (left) looks on as a bull dozer from the Eldoret Municipal Council prepares a mass grave at the a public cemetery in Eldoret. On Wednesday, medical authorities attempted to bury bodies of those who died at the church but relatives stormed the venue to stop the exercise. Uasin Gishu District Commissioner Leonard Ngaluma later intervened and the bodies were returned to the Moi Teaching and Referral Hospital Mortuary.

The survivors (from left) Mercy Wanjiru, Anthony Njoroge, Mary Wahito and Jedidah Wahito (carried and inset) after a Press conference in Nairobi, yesterday. They appealed for help to raise Sh30 million for treatment. Photos: Boniface Okendo/Standard

The scars on their frail bodies tell it all.
Four children who miraculously escaped from the burning Kiambaa church in Eldoret tell moving accounts of how they survived as they mark the first anniversary of the horrific incident.
Burial of Kiambaa church fire victims thwarted

Their bodies full of scars, they recalled how raiders set the church ablaze, killing 28 people.
Tender young bodies were scarred for life as acts of madness engulfed the country this time last year.
The attack that shocked the world inflicted wounds on many children, who will carry scars forever.

Yesterday, when they narrated their miraculous escape from the flames that devoured Kiambaa Church, Serena’s Amani room was dead silent.
Tears swelled in their eyes and flowed as memories of the horrific January 1, 2008, arson attack returned. The youngest– Jedidah Wahito – is now four years. She was saved from the petrol-powered fire by her aunt Mary Wahito Kariuki, 16, who also saved another sibling Anthony Njoroge, 11.
Mary sustained burns as she rescued them. Anthony was burnt on the head and is yet to heal.

Mercy Wanjiru Njenga, 14, sustained severe burns all over her body. Her face was disfigured. The four spent a grueling nine months in hospital.
They spent three months at the Moi Teaching and Referral Hospital and six months at Kijabe Mission Hospital.
And now, they require Sh30 million for further treatment in the US.

It is for this reason that they called a Press conference to appeal to well wishers to help them raise the money. Already, their treatment has cost more than Sh2 million.

On that fateful day, Mercy and other Kiambaa residents took refuge at the Kenya Assembly of God Church. She recalled yesterday that they had been warned of an impending attack the previous day.

“We spent the night at the church even after we were told we would be attacked. In the morning of January 1, our mothers went to prepare breakfast and we were left with the children. Our fathers had slept in the open guarding us. But at around midday, we heard screams. Suddenly, we saw raiders armed with bows, arrows and pangas.

“They chased the men and killed some. We began escaping from the church but they forced us back. They secured the doors then poured petrol on mattresses and set them on fire. Within minutes, the entire church was in flames. People were burning. At this point, I grabbed the children and jumped out. Jedidah was strapped to my back. We managed to reach the road despite excruciating pain. A Good Samaritan took us to hospital,” she recounted.

Anthony’s escape from the flames of death was the most dramatic. Like other boys of age, they had spent the night ushering the New Year guarding sheep. They had been informed of the impending attack and stayed away from the houses.

When the raiders attacked, Anthony and a group of other boys were pushed into the church.
He recounted how he jumped out of the burning building only to be kicked back.
He fell next to an armed raider.
“I bit him hard and as he struggled to free himself, I rushed out and ran very fast towards the road. By now, I had sustained burns on the head and my clothes were burning,” he said.

Anthony’s mother Peninah Wangui Mbuthia broke down as she told her story. She looked at her son and wailed. Peninah says life has never been the same. She has been in and out of hospitals.

Some NGOs have been helping them recover.
Disaster Foundation of Kenya established by the Africa Disaster Risk Reduction Organisation and the Centre for Justice and Crimes Against Humanity are spearheading efforts to assist ten survivors – the four children and six parents.

Chairman of the centre Mbuthi Gathenji said they require Sh30 million for medical expenses for the children.
He said well wishers including the Government have been of help but needed to do more.

Mbuthi asked well-wishers to make their donations to account number 0170293014368 at any Equity Bank branch.
He said the funds would be audited by a reputable accounting firm to ensure they are spent appropriately.

Promotion to glory of Ken Kariuki Muiruri,brother to Maggie Muiruri

Positive Thoughts: Liquor is for the dying, and wine for those in deep depression