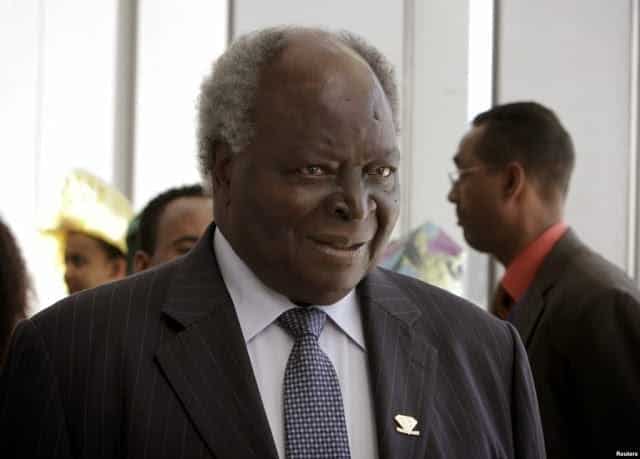 Col (rtd) Geoffrey King’ang’i Muturi has been President Kibaki’s Aide-de-Camp since May 2010. On September 5, he joined the long list of civil servants trooping to the murky world of politics. The man, who prefers to be called King’ang’i (crocodile in his Mbeere language), spoke to John Ngirachu about his time as the President’s bodyguard

When the call to become the man who literally walks in the shadow of the President comes, there is little time to ponder, tell friends and family or even ask how the appointment has been made.

In mid-May 2010, Col Geoffrey King’ang’i Muturi received that call. The instructions were to report to State House and understudy J.L. Mrashui, the President’s bodyguard, who would soon be leaving for studies in the United States.

The selection of his bodyguard is secretive. Like much else that happens in the military, it is ordered and timed to the second: Speak only when spoken to. Don’t question orders. Don’t defy authority.

The President needs to know his bodyguard as intimately as possible, but without ever having the opportunity to hear them talk or get their point of view the way a chief executive vets a personal assistant.

Unknown to Col Muturi, the President had selected him from a shortlist presented to him by the Chief of General Staff.

He had looked through CVs, documents from the vetting process by the National Security Intelligence Service and the documents the officer had accumulated over his time in the military.

During such a process, the officers under consideration have no clue about it. The reality of Col Muturi’s new job hit home when Mrashui left in civilian dress and he took over duties in uniform behind President Kibaki at State House.

“I think the big shift is the whole psychological change because you’re working for the President, completely unprepared,” he told the Sunday Nation.

Apart from having to move his family to State House, the 52-year-old would also have to adjust to a life in the shadow of the Head of State.

But it also came with the opportunity to see him in his moments of happiness and emotional strife. First, though, he had to bear the scrutiny of his boss, the Chief of General Staff, and senior military officers.

His first main event with the President was Madaraka Day of 2010 at the Nyayo National Stadium. “Obviously, the military authorities are all watching to see how the new guy is performing. It was live, and the whole day I saluted wrongly,” he recalled.

How bad would a salute need to be for it to be sloppy by military standards? The bodyguard’s arm was hanging loose. To salute properly, the elbow should be perpendicular to the shoulder, the palm facing the front and the index finger level with the right eye.

Col Muturi spent more than an hour the following day with a drill sergeant and a senior officer practising until they were satisfied he had got it right.

Before his appointment as ADC, Col Muturi had been an adviser on military intelligence to the National Security Advisory Council. There is little time away from the President.

It means long, tiring days. One must keep a sharp eye on his charge, who should always be in sight when in public.

“There is no one time that I would say I don’t know where the President is. You have to know where he is all the time. He has to be within range and you must see him and the environment in which he is,” he said.

He recalled the exciting times such as accompanying the President in the back rooms and out to the stands at the Soccer City in Johannesburg for the World Cup.

And there were the awkward moments like scuffling with former Libyan leader, the late Muammar Gaddafi’s muscled female bodyguards.

There were the times he wouldn’t speak about; the numerous times he stepped into an office next door when the President was having meetings in State House and hearing but not listening to conversations.

The soft-spoken, light-skinned man soon discovered that his charge was conservative and rarely departs from the formal way he likes affairs conducted.

He soon discovered that the President hardly ever mentions names and he would need to understand his body language as he rarely breaks into random conversation.

But he hums along to music, seems to enjoy the Kikuyu Christian hymns he is familiar with and taps his left foot along to the music. He catches up on both the Kiswahili and English bulletins, so meetings have to end in time for the news.

Kenya has gone through some momentous times over the 26 months Col Muturi was ADC. He recalls August 27, 2010, the day the Constitution was promulgated, as the day he saw the President elated, excited and dropping the formalities and routine he was used to.

“He was very, very excited about it. To him, it was a momentous occasion.” The telltale sign of the President’s excitement was when he agreed to wear the gold-coloured chain signifying the highest honour in the land, the Chief of the Golden Heart.

“He is a bit conservative, he doesn’t like new things but on this occasion, he agreed to wear it … It was my longest day because of worrying about the details,” the former ADC recalled.

There have been the sad times; deaths of friends such as Njenga Karume and John Michuki. President Kibaki prefers to be left alone at such times. He also makes a point of attending funerals of close friends and will wait until they are over.

Barack Obama vs. Chicago: He is not Land Grabbing! Just being a Kenya