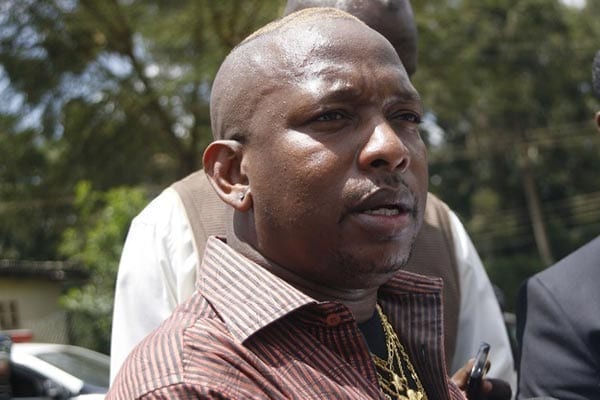 Makadara MP Mike Sonko was elected in parliament in a 2010 by election at a young age of 35 years.

The MP has become to be among the most controversial MPs in the 10th parliament and also in the history of independent Kenya.

He is a serial jail breaker, a fugitive from the law, and a late bloomer in defence of public good.

When he was eventually elected, details emerged that Sonko’s past life, since his election as a Makadara Lawmaker has not been smooth. Sonko has made  a name for himself with his thuggish and often garish dressing that resonate  with the youth.

Unsurprisingly, this earned him a place in Deputy Prime Minister Uhuru Kenyatta campaign team where he is tasked with reaching out to the youth and getting them to support The National Alliance(TNA)’s Presidential  bid.

Sonko spent his early life in crime, from mugging people in the streets of Nairobi and Mombasa to a major international drug lord.

He once escaped from Coast Provincial General Hospital where he had been taken by Shimo La Tewa Prison authorities for treatment.

Prison records indicate that Sonko had escaped  from custody at Coast General Hospital in Mombasa with the help of police, hospital and prison officials in April 1998,after which he fled  to neigbouring  Tanzania disguised as a woman.

Like his colleagues Mwau and Kabogo, Sonko presented himself as a victim and claimed during a political rally in Mombasa that Police Commissioner Mathew Iteere had hatched a plan to kill him. Since his election, more serious allegations have been made linking Sonko to a cartel of powerful drug lords.

On December 2010, he was named together with Juja MP William Kabogo, Kilome MP Harun Mwau, and Kisauni MP Hassan Joho as one of the major drug traffickers in Kenya, by Central Intelligence Agency (CIA) report.

Bill in Arizona legislature would have hospital workers checking citizenship