VIDEO: Diaspora Funeral Solution For Your Peace Of Mind

Interview with Mr.Nelson Kuria,CIC Group CEO during a recent visit in Seattle Washington.Mr Kuria says that CIC is committed to partner with Kenyans in Diaspora to help them overcome the challenges they face especially when one dies

“People in the Diaspora are very skeptical about Kenyan organizations because they have lost out in a number of instances through briefcase masqueraders coming here and pretending to offer all kinds of solutions. And like they say once bitten twice shy and I do not blame the Diaspora for behaving so.”

This was said by the CIC Insurance Group CEO and Group Managing Director Mr. Nelson Kuria during a visit to the US meant to familiarize Kenyans living abroad with solutions that his group had to offer, backed by the solid reputation and financial muscle that the CIC group of insurance stands on.

While speaking with KENYA360 MEDIA, Mr. Kuria stressed that CIC has invested time and resources in understanding the needs of the Diaspora and has stayed away from pressure selling techniques common in the insurance market but has instead taken a long-term approach that aims at educating the potential customers first, with the belief that an educated customer is a more lasting one.

He noted that it was from this engagement with the Diaspora that the CIC Group had identified unique needs of the Diaspora enabling the company to tailor solutions specific to this market.

Mr. Kuria while appreciating the role of community fundraisers in the event of the demise of a Kenyan living abroad noted that the increasing population of Kenyans living abroad coupled with the rising median age of the Diaspora base will inevitably result in higher number of demises and which calls for a more sustainable solution.

Such solutions, he said, should be those that would be a better fit with the high pressure livelihood that Kenyans abroad have to deal with which in most instances revolves around school, family, doubles and sometimes triples just to make ends meet.

In meeting this challenges, Mr. Kuria stated that the CIC Group had funeral solutions that are very affordable such as the “Last Expense” which costs approximately USD 100 annually for a Ksh.1 Million cover and which would thereby relieve the financial stress on family and friends and allow them to instead celebrate the life of the departed without undue worries.

In explaining another CIC funeral cover the Return Ticket, Mr Kuria was quick to point out his groups advantaged position of engaging with the Diaspora stating that the idea for this product had been conceived during a previous town hall meeting that he had had with Kenyans abroad.

He stated that the product was as a result of listening to the Kenyans tell of their challenges including the fact that many a times Kenyans living abroad have gone into depression after missing out on the funeral of a loved one for lack of funds to fly home.
As the name implies, the return ticket policy is meant to provide the ability to travel home in the event of the demise of either one of the covered next of kin (max 5). In the unfortunate occurrence of such an event, the cover pays out immediately and the insured can then decide at their discretion on whether use for a ticket home or otherwise disburse of the cash to facilitate the funeral. The annual cost of this policy is as low as USD 40 per annum and not more than USD 120 for a cover of between Ksh. 100,000 to Ksh. 300,000.

Mr. Kuria indicated that the CIC Group also offers an array of products that the diaspora could take advantage of to instill a structure in the monies that they send home for school fees and medical bills for their relatives. This he said includes an education policy that would pay out at a set time and a medical insurance that covers inpatient and out patient care and all for an annual fee of approximately Ksh. 4,000. “The future belongs to those who prepare fore it now” he stated.

You can check out the group’s Diaspora specific website at:

Do not leave the burden of funeral expenses on your loved ones.Kenyans living in the Diaspora have experienced difficulty when a fellow Kenyan living in their community dies and the cost of repatriation is borne by friends and family. The funds that have to be raised eat into other people’s savings.CIC has developed a solution to cater for this last expense to ensure that Kenyans living in the Diaspora receive a dignified funeral and return home in the unfortunate event of death.Benefits and Features of the CIC Last Expense Cover:A death benefit of  is payable to the beneficiary to provide cover for: 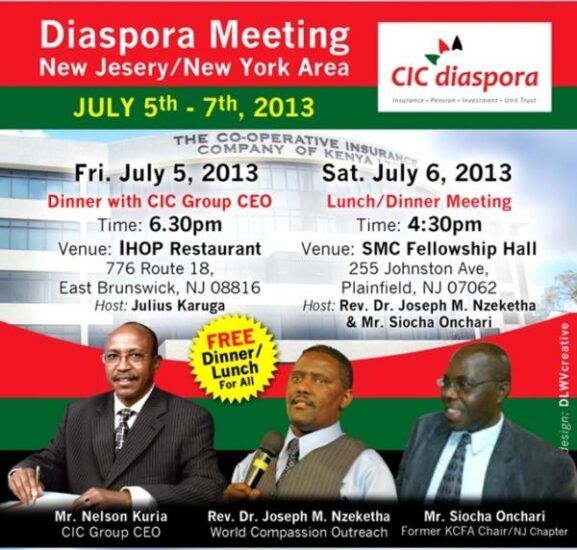 VIDEO: Diaspora Funeral Solution For Your Peace Of Mind

Why Tanzanians Want Raila’s Daughter To Apologize For Goof