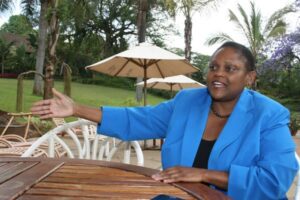 The ICC cases facing President Kenyatta, his Deputy William Ruto and radio journalist Joshua Sang should be dismissed because the prosecutor did not conduct credible investigations and the process will end up in “empty justice,” a former US diplomat on Africa has said.

Former US Assistant Secretary of State for African Affairs Jendayi Frazer says the African Union request to the UN Security Council to postpone the cases for a year should, in fact, be replaced with a dismissal of the cases.

Dr Frazer was in office at the time of the disputed 2007 election results and the violence and political agreements that followed what is characterised as one of the darkest chapters in Kenya’s history and was one of the diplomats working to resolve the crisis.

“I think the cases are so weak they should be dismissed. Deferral just keeps a cloud over the head of the leadership. But that said, I think you can’t have a case where you are asking the President and the Deputy President to be at The Hague. That doesn’t make any sense to me,” she said.

Dr Frazer revealed in an interview with the Sunday Nation that she hired a lawyer “close to the ICC” specifically to look at the evidence against President Kenyatta who, she says, informed her current position.

She asked for the legal opinion because she found the case was not consistent with the US embassy briefings from the time of the crisis and her subsequent meetings with Mr Kenyatta at the time.

She then attacked the office of the prosecutor: “Where are the forensics? Who did the actual investigation? … I feel that the victims will be most served by having cases that have real forensics so that people who actually killed them can be brought to justice and that’s not happening. The victims aren’t going to get any justice from the ICC.”

At the start of investigations in 2010, Chief Prosecutor Luis Moreno-Ocampo, deputised by current Chief Prosecutor Fatou Bensouda, promised that he would follow the evidence and nothing more.

“We will investigate the crimes, protecting the victims and respecting the rights of the suspects. We will follow the evidence, and we will prosecute those most responsible,” Mr Moreno-Ocampo said.

The decision on the quality of evidence will be decided by the trial judges currently handling the matter but Dr Frazer seems unconvinced and says ICC kowtows to Western powers.

The straight shooting former diplomat is pessimistic about the outcome of the request by the African Union to the Security Council on the Kenyan cases because “It’s the exact same countries who have been manipulating the ICC. The prominent five are there and this is the problem of the institutions that we have today … that they cannot serve all of us equally.”

The “prominent five” are the five permanent members of the UN Security Council who have the power to veto any decision. They are China, US, Britain, France, and Russia.

“And that’s how the ICC has gone so terribly wrong. Just give me one case that’s not African. They won’t go after Assad because Russia won’t let them,” she said.

Syrian President Bashar al-Assad was recently suspected of using chemical weapons against civilians in a civil war in his country in which thousands have died.

The US stopped short of a military strike over Russia’s opposition to such an eventuality and after an agreement that President Assad would cede his chemical weapons to international watch.

Dr Frazer referred to the Syrian scenario as part of the ICC failures and called the court a “broken institution” whose prosecutor had no capacity to properly investigate crimes against humanity and had ended up with only Africans in the dock.

“I think that people conflict the ICC with justice. I don’t care what the ICC decides in the Kenyan case, there will be no justice. There is no justice when it’s a political case. It was a case brought by politicians essentially failing to act because it was politics,” she said.

“If somebody wants to feel empty justice, go right ahead and believe that the ICC represents that for you. The ICC is a broken institution.”

She said the ICC and especially the prosecutor’s office should be reformed for it to properly accomplish its mandate.

“The people who believe in international justice should be worried that the ICC is a broken institution. The people who are worried about impunity should be saying we should do something about the office of the prosecutor. Give them the real capacity to investigate crimes against humanity, not to selectively choose politicians to bring forward,” she said.

During the interview in Nairobi, Dr Frazer, however, said her views should not be taken as endorsing impunity.

Dr Frazer was the first high ranking diplomat to fly into Kenya after the break-out of the post-election violence in 2008. She told the Sunday Nation this week that the Bush administration for which she worked for, knew that the election contest was a close call and that most likely, the loser would cry foul but the speed and scale of the violence took Washington by surprise.

“We knew that the race was very close and any time you have a close race you have the potential for discord. It’s typical in Africa that the loser is going to say there was cheating especially if the race is tight up to the very end. That wasn’t a surprise but the quickness of the descent into violence and the scale of that violence was shocking,” she said.

“I was stunned because when I was flying through Europe and I stopped to buy some gadget … I gave my boarding pass to the shop owner and he said “You are not going to Kenya, are you?” And then when I got on the plane, it was largely empty and that’s when I really knew that things were bad. The planes coming to Kenya are always full of people and no one was coming in such a short period of time,” she said.

She had been dispatched to Kenya by Secretary of State Condoleezza Rice to find President Kibaki and his main challenger, ODM presidential candidate Raila Odinga, holding different positions.

On the one hand, she said, President Kibaki said that anyone who disputed the official results should go to court while, on the other hand, Mr Odinga said he did not have any trust in the existing institutions and that his victory had been stolen.

She was confident that there would finally be a truce but she returned to Washington without a breakthrough. Dr Rice would later fly to Kenya and meet the opposing sides and it would take her efforts and that of African Union and regional leaders to finally craft agreements and bring a truce.

Dr Frazer says the emotions among the people who accompanied President Kibaki and Mr Odinga to meetings was palpable.

“There was definitely anger. I wouldn’t say that I saw anger in President Kibaki or even Raila but the people around them had a lot of passion,” she said.

“(But) I always believed a truce was possible because they all knew each other and they all had been with each other. The thing about Kenyan politics is that people change alliances rather easily.”

She criticised former UN chief Kofi Annan, who brokered the Kenyan deal, saying he should not have used “the ICC as an instrument of mediation”.

“That to me doesn’t seem like the criteria for an ICC case. An ICC case is that you have to raise to a certain level of atrocities sustained over many, many years. It’s not a tool of leverage in a mediation process,” she said.

Dr Frazer said that the Obama administration should not peg US relations with Kenya on the ICC cases because Washington deals with countries with major outstanding issues.

She cited Russia, which she said had committed atrocities in Chechnya, China’s feud with Tibet and Saudi Arabia and said that the US has its own problems in places like Iraq.

“Who really are we? We are not in fact a party to the Rome Statute. Why would we undermine our national strategic interests in terms of the relations between the US and Kenya because of a very weak case which should not have been before the ICC in the first place?” she said. VIDEO: Cry For Justice For Dorothy Moraa Ongera Who Died In USA