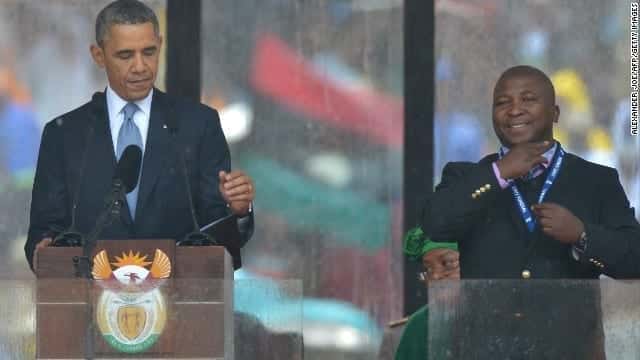 Many have claimed that the sign language interpreter during Nelson Mandela memorial service was a fraud.Watch and judge for yourself.

The man, who signed for a portion of the ceremony including Barack Obama’s speech, was simply making up his own signs, say the Deaf Federation of South Africa. David Buxton, the CEO of the British Deaf Association, said the unindentified man, who was supposed to be signing in South African, was “waving his hands around but there was no meaning.”

Mr Buxton said it was “childish hand gestures and clapping, it was as if he had never learnt a word of sign language in his life.”

He said sign languages across the world share a similar structure and pattern, but his were just repetitive hand movements.

“It was hours of complete nonsense. He is clearly a fraud who wanted to stand on stage with big and important people. It’s quite audacious if you think about it.”

Video by The New York Times