Dubai: A Kenyan cook-turned-chemical engineer graduated last fall after fighting the odds to finally work at a multinational oil and gas company with a salary more than 10 times his Dh800 per month wages as cook.

It all began when Attas Habib, 32, who didn’t even own a driver’s licence, entered the UAE on a visa as a personal driver for an Emirati family in Abu Dhabi.

Back home in Kenya, Habib, after finishing high school at 18, worked in the leather processing industry for three-and-a-half years to support his mother as his father had passed away when he was in secondary school. But his earnings were meagre. It was time to find a better way to earn more.

“Once I came to the UAE, I worked as a cook in a restaurant for 12 hours a day, 4am to 4pm, for Dh800 per a month,” said Habib, who learnt cooking from his mother who cooked snacks and sold them to schoolchildren to support Habib while he was in school.

Habib, who speaks and reads fluent English and Arabic, found working as a cook for long hours tough, especially as it was not what he wanted to do. But he had no choice as it was the only job he found. “I believe people should take advantage of any opportunity that arises. They should not be embarrassed about doing a job. It is all part of a journey to reach your goal.”

After working at the restaurant owned by an Emirati family for six months, the owner of the business helped him get a better job at a car wash for a salary of Dh1,200 a month.

Despite having left his studies for more than four years, Habib never gave up on his dream to purse his education. Eventually, luck favoured him when the Emirati restaurant owner saw the potential in the Kenyan who tutored their children and offered to pay for his education.

“The owner encouraged me to look for a university. He suggested the American University of Sharjah (AUS). I went and found out that the fees for chemical engineering and accommodation was Dh60,000 [at the time],”

At first, Habib was hesitant to go ahead with the degree because he did not want to burden the Emirati family but, after encouragement, Habib, who already had a five-year gap in his education, enrolled at AUS.

Little did he know that his struggle was just beginning because the family was only paying for fees and accommodation and he still needed to support himself.

“I needed to pay for food and books and support my mother. It was difficult with part-time jobs at university because work depended on availability and so sometimes I had difficulty financing my day-to-day needs.”

Things looked up when he got an email from the university asking him to work full-time as an assistant administration officer in the registrar’s office for Dh7,000.

Although supporting himself and mother became relatively easier and he was no longer dependant on the Emirati family, getting a full-time job meant increasing the hours of study.

“I didn’t get a break; I attended classes during the lunch break. I also didn’t have a social life because of the age gap with other students,” said Habib who graduated at the age of 32.

His predicament eventually resolved itself when an unknown donor paid for all his expenses, allowing him to quit his job and focus on his studies to finish faster.

He graduated in the fall of 2013 after five-and-a half years of studying and was offered a job at the multinational oil and gas company, Schlumberger.

His experiences have taught him one stark lesson: “I call on students to be persistent with their dreams and never give up,” he said. “I would like to thank god, the Emirati family that helped me, AUS and my mother for supporting me throughout my journey,” said Habib.-gulfnews.com 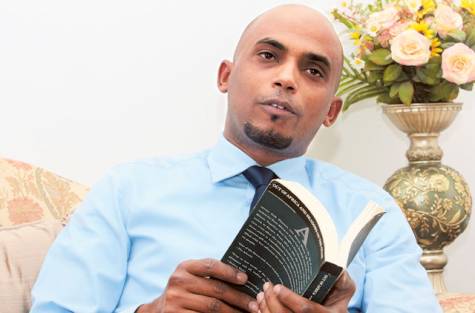