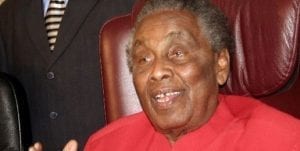 ODM leader Raila Odinga on Tuesday criticised Mr William ole Ntimama’s planned defection to The National Alliance (TNA), saying it was an archaic practice which did not fit in the current political set-up.

Mr Ntimama was on Tuesday to lead a group of Narok elders into ditching the opposition party and joining TNA at State House, Nairobi.

However, President Uhuru Kenyatta cancelled the meeting, with his spokesman, Mr Manoah Esipisu, saying the President was “under the weather”.

This, it was said, would have meant that Mr Kenyatta would have presided over a meeting which would have led to defections not only from ODM but also from URP.

Sources said Mr Kenyatta would have preferred that the leaders declare their loyalty to the Jubilee administration and pledge to promote the ruling coalition’s agenda rather than declare allegiance to political parties.

Mr Ntimama and at least 20 elders from Narok, who included former assistant minister John Keen and former Transport Licensing Board chairman Hassan ole Kamwaro had already assembled in Nairobi ready for the State House talks when the news of the postponement of the meeting were delivered.

However, the spokesman for the Presidency, Mr Manoah Esipisu, said the meeting was postponed at the last minute because President Kenyatta was “under the weather”.

Earlier in the day, the President had launched the Ethics and Anti-Corruption Commission (EACC) Strategic Plan in the company of Mr Ruto.

Kajiado North MP Moses ole Sakuda said the meeting was called off to pave the way for more consultations.

“We withdrew to consult with a view to include more elders because the delegation today was only from Narok. We will be back in a week’s time,” he said on Tuesday.

Mr Ntimama said the meeting was called off on mutual agreement to give them time to hold more consultations and expand the delegation.

“We are going to mobilise more people and a date will be fixed soon,” he said.

Kajiado Senator Peter Mositet also pointed to lack of inclusiveness and alleged an attempt to divide the Maasai. “This thing was not all inclusive… it was organised by power brokers and self seekers. We have advised the President that he doesn’t need middle men to reach out to the Maasai,” he said.

However, Kericho senator Charles Keter, a close ally of Mr Ruto, said the visit would have had no effect on the unity between TNA and URP in the Jubilee Coalition. He said that President Kenyatta was free to meet any Kenyan since he was elected to serve all Kenyans.

“Politically, we are strongly united… This is one government where we have one boss and a deputy,” he said.

The meeting was publicised last week when Mr Sakuda said he would lead a delegation to pledge their loyalty by joining his party, TNA. He said Mr Ntimama was to lead ODM leaders from Narok to TNA.

The meeting, which was to be held last week, was pushed to yesterday when it was again called off. Speaking in Boston, Massachusetts in the US, Mr Odinga dismissed the planned defection as a practice whose time had passed.

He said the defection was inconsequential.

“Defections ended with Kanu. What is going on in Narok is Mr Ntimama and other local leaders trying to find a better way of serving the people of Narok,” he said during an interview on Jambo Boston Radio, an online radio station based in Lowell, Massachusetts.

The former Prime Minister seemed unperturbed that his hold on the area which voted for him overwhelmingly in 2007 was preparing to join his political rivals.

During the 2013 elections, only Kajiado Governor David ole Nkedianye, Kajiado Central MP Joseph Nkaisserry and less than 10 members of county assemblies in Maasailand were elected on the ODM ticket. TNA and URP won majority of the seats.