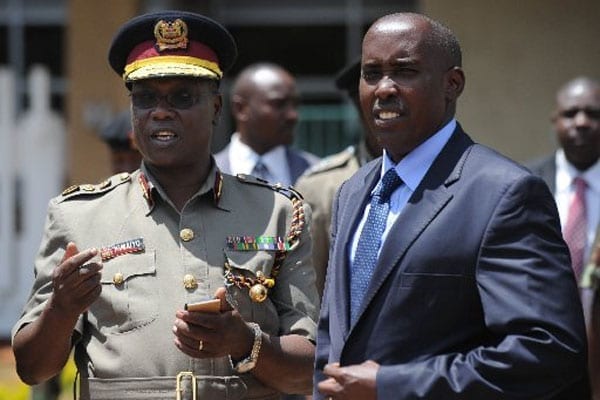 The agreement was signed during the US-Africa Leader’s Summit after more than seven years of negotiations.

He says the agreement seeks to manage border movements and security while providing a framework of information sharing between security agencies.

“The signing of that assistance agreement brings a framework through which information will be shared and make sure that we are able to effectively deal with illegal immigration, issue of wildlife poaching and wildlife products which is a big challenge that really must be managed through entry and exit routes in the country,” he affirmed.

“This will greatly support our current security reforms taking place.”

The agreement was signed between the National Treasury and US Customs.

“This is a process that has been in negotiation for more than seven years and therefore seeing it come to fruition is a major take-home,” he stated.

The agreement will also provide a mechanism to deal with cases of revenue evasion.

He also said that the National Police Service will adopt drone technology from United States security firms in dealing with crime especially poaching and other general crimes.

He says the security firms will also provide communication devices in a partnership with the security sector as the government continues to modernise the police service.

“We will now start tapping into that technology especially the drone technology in fighting poaching, terrorism and even managing other crimes that can only be addressed using that kind of technology,” he assured.

He was speaking during a self analysis session on achievements of the summit which was largely termed as successful.

On regional peace, he said special focus was made on Somalia and South Sudan where Kenya has led the efforts to restore normalcy in both countries.

He said that it was agreed that security challenges should be dealt collectively to ensure the region is peaceful in a bid to promote investments that are ongoing.

He however said security challenges in the region should not be seen as if it’s a Kenya versus another nation situation. “No, it’s Africa versus terror.”

During the summit, President Uhuru Kenyatta had said that the world had abandoned Kenya in its campaign to maintain peace in the region.

In an interview with CNN’s Richard Quest on the sidelines of the summit in Washington DC, President Kenyatta said Kenya felt abandoned by the international community in its fight against terrorism.

The Head of State explained to Quest that following the 9/11 attacks, the international community rallied around the US, but in Kenya’s case, the West immediately issued travel advisories.

“We do feel the world isn’t doing enough to support us in confronting the challenges we have.”

The travel advisories, he said, served to encourage those behind the terror attacks on Kenya, the Al Shabaab.

“Richard Branson, for example, has gone out there and said no, let’s not issue these travel advisories, we should actually face up to the enemy, invest more, be more in Kenya.”

He said Kenya’s forces in Somalia would benefit from the support of the international community as would the government of Somalia in order to more expediently root out the Al Shabaab.

President Barack Obama in response said the US will continue to help build the capacity of Kenya’s security services and better equip them to deal with the problem of Al Shabaab and other security threats.

On cyber crime, Lenku said his ministry was developing a bill with the Information and Communication Technology ministry to address the concerns.

Love for God or Fear of Caesar

UHURU, RAILA BRACE FOR BATTLE AHEAD

The Esther Arunga story: A closer look at the lives of Kenyan TV girls