President Uhuru Kenyatta has said politicians who hire youth to misuse them for political reasons should know theirs was politics of the past.

The President said it was shameful for politicians to hire youth to cause violence and to heckle other leaders for some small money instead of helping them to aspire to achieve something meaningful in life.

“The future belongs to the youth and we should help them fulfil their dreams and those politicians should stop their disgraceful habit of misusing the young men and women,” he said.

The President spoke in Gilgil town on Wednesday after he unveiled a new logo for the National Youth Service.

He was in Gilgil for the passing out parade for 4000 trainees at the National Youth Service College.

He said politicians who organise youth to cause chaos are irresponsible and have no vision to empower youths.

He encouraged the youth to allow politicians to engage them only on lawful issues that bring benefit for them instead of being misused by selfish leaders.

“If some politicians want chaos and violence, why can’t they use their own children instead of hiring others,” he said.

The President said such leaders act in cowardly manners by sacrificing young people and keeping their children safe.

“This habit of hiring young people to make noise and cause chaos is the politics of yesterday. Don’t corrupt the future of the youth if you have nothing meaningful for them,” he said.

The President was accompanied by Devolution Cabinet Secretary Anne Waiguru and Nakuru Governor Kinuthia Mbugua at the ceremony to unveil the new NYS logo.

The President said his Government will increase efforts to provide better opportunities for the youth of the country.

He said the NYS college will enrol more young men and women and encouraged those from Gilgil not to be left out. 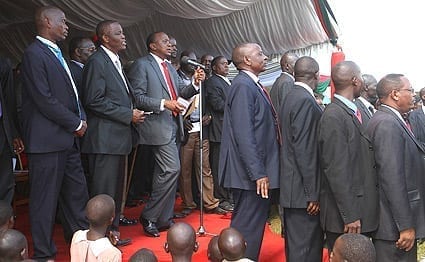