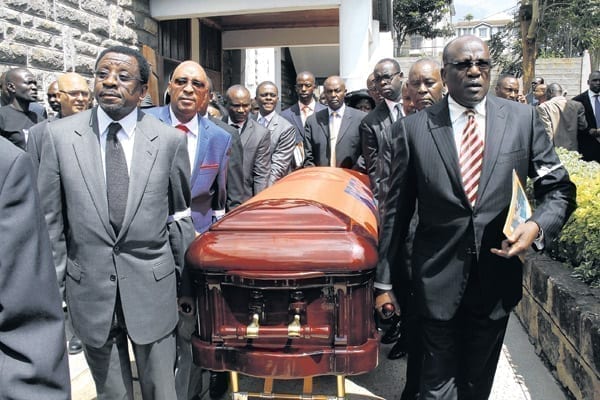 Chaotic scenes marred an inter-denominational funeral service for Senator Otieno Kajwang’ when rowdy youths demanded to view his body but were denied the chance.

Some leaders were also heckled by hundreds of mourners at the Uhuru Park service in Nairobi.

The youths unsuccessfully attempted to block the hearse after they were denied a chance to view the body. They later broke the catafalque (coffin trolley), demanding to have their say.

The hearse was speedily driven out of Uhuru Park with part of the crowd in hot pursuit.

Trouble started soon after the body arrived at the park from the Nairobi Central SDA Church where a requiem service for the Homa Bay senator had been held.

The youths surged towards the casket draped with an ODM flag, prompting security officers to push them back. The youths resisted, resulting in a shouting match.

Senator Isaac Mwaura denies they bribed Way Out after wife…

Efforts by Senators James Orengo and Elizabeth Ong’oro and MP John Mbadi to calm the crowd bore no fruits as the youths went into a frenzy while surrounding the coffin. For close to an hour, the leaders were unable to make their speeches due to the deafening shouts.

While some demanded to be allowed to view the body, others heckled leaders who had been asked to pay their tributes to Mr Kajwang’.

National Assembly Speaker Justin Muturi found himself in trouble after he was called to address the mourners but was shouted down.

It took the intervention of Cord leader Raila Odinga, who pleaded with the crowd to accord Mr Muturi a chance to introduce MPs at the event.
After the introductions, his brief speech was drowned by jeers and he cut short his condolence message.

Kapseret MP Oscar Sudi (URP) also got a rude shock when the crowd forced him from the podium soon after he was handed the microphone.

Nairobi Governor Evans Kidero did not address the crowd. His deputy, Mr Jonathan Mueke, only made brief remarks.

The crowd went wild with jubilation when Mr Odinga rose to speak and chanted “bado mapambano” (the struggle continues) which was a favourite chorus of Mr Kajwang’ in political rallies.

Mr Odinga said the senator would be remembered as a courageous leader who fought for social justice and the success of devolution.

“Even if Kajwang’ is dead, we will continue to soldier on and continue with his legacy,” said Mr Odinga.

He hit out at the government for failing to secure the country, adding that Kenyans should not lose lives in terrorist attacks.

During the church service, Kajwang’s widow, Rose, while eulogising her husband described him as “a slender, tall, dark man with very white teeth”.
Kajwang’s second wife, Ms Faith Vivian Otieno, also attended the service together with her two children, Christy and Ronny Odinga.

She was not given a chance to introduce herself or eulogise her husband. Neither was she acknowledged. Her photos and those of her children were also missing from the funeral programme.

Speaking on behalf of the family, Mr Moses Otieno Kajwang’ described the late senator as a pace setter who inspired his siblings and assisted many.

“He was in the forefront in helping the needy especially in the area he represented in Parliament,” Mr Otieno told the mourners.

WHY WESTGATE MOVIE WILL BE SHOT IN SOUTH AFRICA