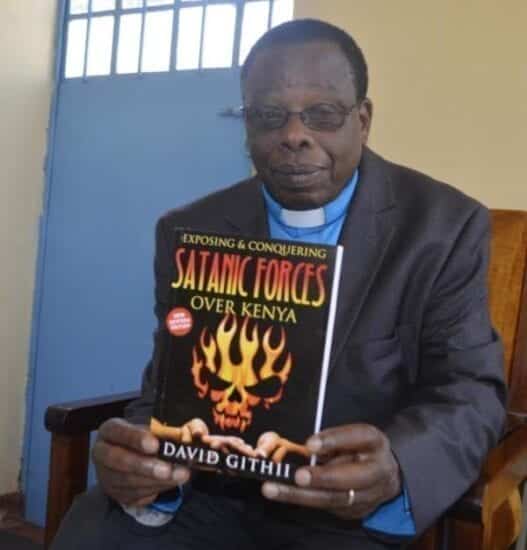 Rev Dr David Githii believes God called him into the ministry not to hold titles but to reach the unreached people with the gospel, and this is why despite being abruptly retired by the Presbyterian Church after occupying the highest office of the church in East Africa, he has started a new church.

Rev Githii has established Elgibbo Church (means the Lord Almighty) in Ruiru in Kiambu County, a church anchored in evangelism and intercessory in an area known as Gitambaya (Kikuyu language for cloth), and a area he says has no church and the residents are drug addicts, financially weak and live in simple houses.

Lack of a church, the calling of God in his life among other factors prompted the former moderator to start a church in February 2014.

“Since I was retired in April 2012 until February 2014, I would just sit in my living room and watch different preachers on TV and assume I had attended church service on Sundays,” said Rev Githii.

He kept off physically attending any church because his name was dragged in the mud by the very church he had served so faithfully since his ordination in 1984.

“I could not attend church physically as a presbyterian because my name was tainted in those circles and I also did not want to intimidate those present with having a moderator sit among the congregation. I also did not want to attend a pentecostal church because that would give my enemies something to talk about of me no longer being a presbyterian,” said Rev Githii.

The new church, he says has a congregation of six people where three recently gave their lives to the LORD. It is made from a tent.

“I believe it was God’s time for me to leave the PCEA Church. I was not shocked when I was retired since the concerns I raised about the church of homosexuality, devil worship and the Lord’s table were grave and I expected my words would come with repercussions,” he says.

On homosexuality, during his term as the moderator, he met with different cases of homosexuality in the leadership of the church (the Reverends) where he stopped some from serving in the church.

“I asked the church to form a commission and investigate the increasing cases of homosexuality in the church, but this was greatly opposed and was one of the reasons why I was retired,” said Rev Githii.

Rev Githii also refused to endorse gay marriages in the Presbyterian Church during a General Assembly meeting held in America.

“The organisers of the meeting wanted me to stand during the meeting and say ‘me, my church and the church in Africa are for gay marriage’.”

“I instead opposed gay marriages, and from that moment henceforth the organisers refused to pay for my expenses although when leaving Kenya I had been told it was an all expenses paid trip. I had only USD200 on me, but God made a way and through help from some people who had pity on me I made it back home,” he said.

Rev Githii wore a religious collar during the interview and maintained that what he underwent was an abrupt retirement that is not recognised in the Presbyterian Church since a moderator continues serving as long as he has the energy.

He ends by telling the church leaders not to fear speaking out the truth despite the opposition leveled against them because God will always fight for them.

He gives an example of 1984 when he was ordained and proposed the church divide the congregation into smaller groups (cells groups) who would meet for bible study and prayers. However, he says the idea was opposed and he was accused of attempts to divide the church. Years later his idea is implemented in form of ‘districts groups’ where church members meet in homes for fellowship.