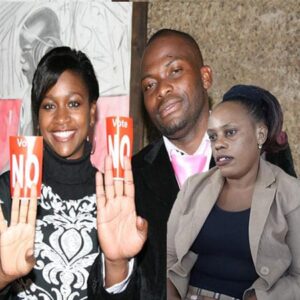 A woman has come out claiming that she was married to Quincy Timberlake for ten years before he allegedly dumped her for TV hottie Esther Arunga. In an exclusive interview with The Nairobian, Rose Mueni narrates how she met, fell in love and raised a family with Quincy.

Mueni says she suffered from depression after Quincy dumped her with three children aged between 8 and 13 and reveals that she has slept out in the cold with her children on more than eight occasions after her door was locked for defaulting on rent payment She talks of starting life afresh, without the man she loves, and the anguish of knowing he is languishing in an Australian jail.

“I met Quincy when I was in my early 20s. It was in February 1999 and I was a college student in town. One day, this smartly dressed man just stopped me and said he wanted to have a word with me. Within 30 minutes, I was enjoying his company so much I didn’t even want to leave,” claims Mueni. She describes their meeting as love-at-first-sight and that by the end of the year, she had moved into Quincy’s house in South B and was already pregnant with their first child.

“It was a happy marriage. Quincy was a musician and he was always travelling to Tanzania and Uganda for performances. Life was good and I have to admit, Quincy was a good provider. I was happily married and my husband was kind, funny, and very loving. He was the model husband,” Mueni adds.

In 2004, after three years of marriage, she conceived and delivered their second-born son. “Quincy was elated and so was I. Our family was growing and Quincy was constantly travelling outside the country for music tours,” Mueni alleges.

He visited his in-laws

She says Quincy had already visited her parents several times and was well-known by her family. She however admits that she had neither seen Quincy’s mother nor gone to his village.

“We used to talk to my mother-in-law on phone and had planned a visit but it just never happened,” she says. She adds that all was well until 2008 when Quincy’s trips outside the country started getting longer. He would be out of the country for weeks. “One time, he was in Tanzania for two weeks. He then called to say another opportunity had come and he was going to South Africa. He was away for three months, but when he returned, I could tell something had changed in him,” says Mueni.

She says she had many unanswered questions about her husband’s activities and music career, but chose to ignore her concerns since she was only interested in making her husband and children happy. She claims Quincy had become short-tempered and didn’t want to talk much about his business.

From 2008 to 2010, Mueni alleges that Quincy would leave for weeks, making her suspicious of possible infidelity. She claims that news of Quincy and Joseph Hellon being arrested for running an illegal society broke the day she had resolved to confront him. The two were being held at the Industrial Area Remand Prison.

“The questions I had in my mind vanished and I was only concerned about his well-being. I used to visit him in prison and would find other visitors there too. I remember seeing Esther Arunga, but it never crossed my mind that my husband was dating her,” claims Mueni. She claims to have been surprised to learn from news reports that Quincy had gotten married to Esther. “I went to my bedroom and cried. There was nothing I could do.

He is a man, and I could not stop him from marrying another woman. From that time, he stopped coming to see us and even stopped sending us money. I met him once and confronted him. He said he wanted to move on with his new life and I had no alternative but to accept his decision,” claims Mueni. After 10 years, she says, her marriage came crumbling down and she was left with three sons to take care of. She says that she started looking for odd jobs to sustain her family, as the man she had known as a husband made headlines with declarations that he was going to vie for presidency.

“You can’t force someone to love you. He met another woman and so I had let him go. I also couldn’t force him to provide for us, so I depleted my savings and started relying on friends and relatives to survive. We had been leading a good life, but it all ended abruptly and without warning,” claims Mueni. She says that she moved from their spacious house in South B and started living in one-roomed houses in Umoja, only to be kicked out when she couldn’t afford Sh3,000 rent.

Locked out of house

“I have been locked out of more than seven houses. In the end, it was always my elderly mother who came to my rescue. I have no papers since I had quit college to marry Quincy. I was madly in love,” Mueni alleges.

She says that she suffered depression, in 2008, and her three sons were similarly affected. “That is the time talk of Placenta Party and Finger of God were hitting headlines and my children would see their father in newspapers and television. They didn’t know why he had to leave. My first-born got into depression and started suffering serious self-esteem issues,” Mueni says.

She adds that her second-born also developed anger issues and that the third son is so emotional and cries all the time. “My last born still tells me, ‘Had daddy been around, I wouldn’t have to sleep hungry or wear torn shoes.’ It tears my heart as a mother, and I do all I can to provide for them,” Mueni says adding that she has not spoken to her Quincy for close to five years. “I would want him to know that the kids love him and they miss him. I hold nothing against and feel for Esther Arunga who has gone through a mother’s worst nightmare of losing a son. I pray for her, and if my husband wants me back, I am ready and willing to reconcile. However, he doesn’t want anything to do with me, I will let him go to lead his life. I have been lonely for too long,” Mueni claims. She says she is tired of asking friends and relatives for help and is desperate for any job to enable her provide for her three children.
-sde.co.ke

Meet ‘Mama Africa’, the Kenyan artiste reciting her way into a fortune in USA

IF SILENCE IS GOLDEN, THEN SPEECH IS PLATINUM