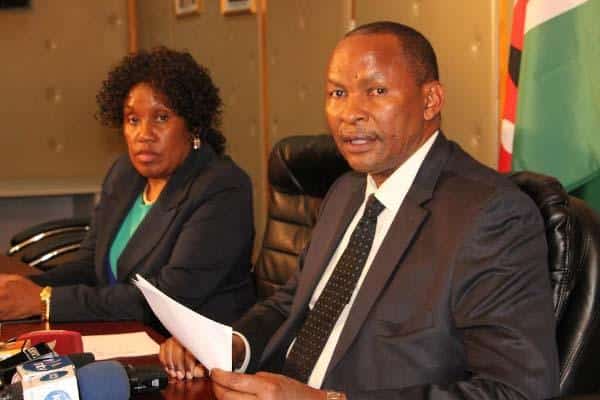 Nairobi, Kenya – Suspended EACC commissioners Mumo Matemu and Irene Keino have blamed their woes on architects of the Anglo Leasing scandal and their protectors in the Jubilee administration.

They have also pointed accusing fingers at powerful brokers linked to the grabbing of the Sh8 billion parcel of land in Karen, Nairobi; and their persistent queries to find out how their new landlord at Integrity Centre, the commission’s headquarters, got to own the property that they pay Sh70 million in rent every year.

In a dossier that President Uhuru Kenyatta has submitted to the five-member tribunal chaired by Justice Jonathan Havelock, which will determine the commissioners’ fate, the duo insists the plot to oust them was hatched when they decided to haul the three businessmen in the Kamani family to court.

The commissioners have revealed an elaborate plan to make sure the corruption case against the Kamani trio collapses. The first move, they say, was to file the petition and have MPs kick them out; then once they are out of office, fresh cases will be filed to stop investigations into the Anglo Leasing scandals.

“It is clear that the intention is to cleverly and wittingly frustrate active investigations into major scandals and facilitate acquittals of suspects arraigned in court over major cases such as the Anglo-Leasing scandal,” Matemu noted yesterday.

He added: “This is aimed to be achieved first by disbanding the Commission and then filing of applications in court to acquit and or seek injunctions into ongoing investigations on account that there is no Commission to undertake such functions.”

The accusations against the powerful brokers with links to State House come as fresh revelations emerge that a prominent city lawyer camped at a five-star hotel, opposite Integrity Centre, and solicited bribes from top State officials in exchange to having their names omitted from the secret EACC ‘list of shame’ (see separate story).

Director of Public Prosecutions Keriako Tobiko threw the spanner in the works in his report to the National Assembly two days ago, in which he revealed that he had not cleared Mining Cabinet Secretary Najib Balala over allegations of soliciting Sh80 million in bribes from a mining firm.

Mr Tobiko said he rejected EACC’s verdict to close the file against Mr Balala and ordered the commission to institute free investigations against the Cabinet Secretary.

The DPP’s report shows the anatomy of corruption in the country that pervades all spheres: a parking attendant pocketing Sh1,000 in bribes; a traffic police officer asking for Sh5,000 to look the other way in traffic offences; a primary school teacher asking for Sh2,000 to admit a pupil to school; and even two officers of the EACC caught soliciting Sh180,000 to issue a tender. Members of County Assemblies too have reportedly been seeking between Sh40,000 and Sh400,000 to grab pieces of land.

Besides, MPs have now focused their sights on the National Treasury in the secret privatisation of Telkom Kenya, and now want the EACC to resume probe. This means President Uhuru Kenyatta’s Chief of Staff Joseph Kinyua, who was the accounting officer at the Treasury when the mysterious transaction happened, might also end up under investigation.

“We are asking that those who committed taxpayers into this fraudulent agreement without a budgetary support must be brought to book. These individuals are known. They should be named and shamed. So, we expect the EACC to bring these individuals to book as soon as possible so that they can serve as a lesson to any other future participants in future privatisation processes,” said Adan Keynan, the chairman of the Public Investments Committee which investigated the Telkom Kenya deal.

In their dossier, the commissioners paint EACC Deputy CEO Michael Mubea, suspended on Monday this week for the second time within two months, as the link between the corrupt powerful businessmen and brokers on one hand and the sleuths at the commission.

They admit that they got a call from the President’s advisor of constitutional affairs Abdikadir Mohammed to take Mubea back; when they refused, they were hauled to Harambee House, the office of the President and told to make sure he returns to office.

Matemu and Keino said Mubea pushed for out-of-court talks with the Anglo Leasing suspects, but the commission ensured they were presented in court. Mubea asked the investigators in EACC to “close” the probe into the Integrity Centre at a time when the commissioners were keen to unmask malfeasance.

But in his defence, Mubea denied seeking to frustrate the commission.

The Deputy CEO added that he never “engaged in any negotiations for the settlement of Anglo-leasing cases without knowledge and consent of the Commission and could not do so unless there was a firm offer from suspects.”

He insisted that: “All correspondence is done on behalf of the Commission.” In fact, he notes that he shared “a letter on a proposal for out of court settlement on the Anglo-Leasing cases with the Commission which advised him to negotiate with suspects and see what comes out of the negotiations.”

Mubea denied ordering closure of the file in the investigation relating to change of ownership in the Integrity Centre.

“Though he marked on a letter to the Director of Investigations in this matter that the same be closed, he did not mean that it indeed be closed and that this was just a recommendation from which he expected a response. The response never forth came.”

It’s not just Mubea, his boss the CEO, Halakhe Waqo, also had a tiff with the commissioners. He said he had “no regrets” for denying commissioners access to key files.

“This was because the Commissioners on several occasions called for files especially the ones on Anglo Leasing cases with ulterior motives,” Waqo noted.

In the dossier to the tribunal, Waqo noted that “Keino was among commissioners opposed to the Anglo Leasing and Geothermal Development Corporation investigations and told him to go slow on the same. How could he allow her access to investigations files having made her intentions clearly known on some of the files?”

When the tribunal sits all these issues will be unveiled and interrogated and the final decision on the fate of the commissioners made.

8 Things We Can Learn From Lupita