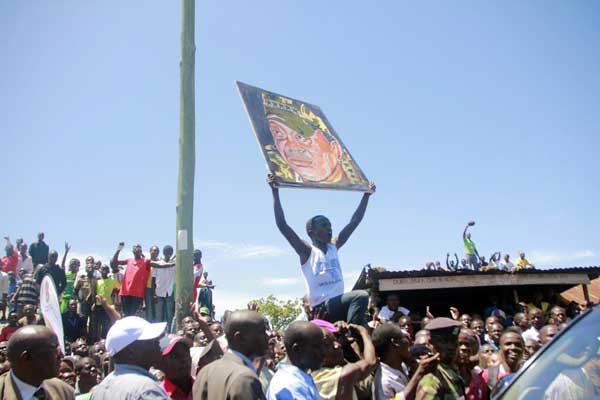 For his love of the party, Benard Otieno Amunga’s friends nick-named ODM.

Mr Amungo is passionate in whatever he does – from defending his party and Opposition leader Raila Odinga to his boda boda business.

The President was in town to open the second devolution conference held at the Tom Mboya Labour College.

The 28-year-old father of two stood in front of Mr Kenyatta’s motorcade at a zebra crossing on the Oginga Odinga Street, forcing him to speak to residents.

Mr Kenyatta was en-route to the Kisumu International Airport after opening the conference and launching a slum upgrading programme in Nyalenda.

Amunga’s attempts to stop the President however drew the attention and wrath of Mr Kenyatta’s security detail who roughed him up.

They probably thought he intended to cause chaos.

The security personnel who were in a car ahead of Mr Kenyatta wrestled the boda boda rider to the ground as they tried to pull him away from the road.

“Tunataka President Uhuru aongee na sisi (we want President Uhuru to speak to us),” he shouted as he fought to free himself from the police officers who were trying to silence him with blows.

By this time, curious onlookers had started milling around the President’s vehicle.

The commotion attracted the attention of the President who decided to stop and address the milling crowd from atop his car.

“My decision to stop the President was a matter of life and death. I only had a minute to force him speak to us.

“He is the President of Kenya and as Kisumu residents, he owed us greetings,” Mr Amunga toldNation.co.ke in an interview. The bold move not only gave the President’s press team exclusive pictures used on their official Facebook pages, but also pictures for the Daily Nation front page.

This was Mr Kenyatta’s first tour to the city that is the political bedrock of Cord leader Raila Odinga.

His last visit to the town was a stopover at the Kisumu International Airport in 2014. He was going for the memorial ceremony of Amani leader Musalia Mudavadi’s father in Vihiga.

Speaking to for the first time since the bold move, Mr Amunga told Nation.co.ke that his reason for stopping the convoy was to seek audience with the President over problems the youth in the county have faced after his pleas to local leaders to assist them failed.

The plan to stop the President’s convoy was hatched a day before the visit.

He had moved around town asking the youth to welcome the head of state to the county. On the material day, Mr Amunga said he approached traffic police officers who were clearing the roads and told them his intentions to stop the convoy.

This was to avoid a violent confrontation with the President’s security detail.

“On Monday before the President came, I moved around town and mobilised youths to give him a heroic welcome. This was our only chance to show our love for him,” he said.

He said his initial idea was to stop the convoy as it made its way to town from the airport but changed the decision on learning the President was headed to Nyalenda slums.

“My colleagues asked me to accompany the President to Nyalenda and present my pleas but I refused.

“I wanted him to speak to me at my place of work.

“I had armed myself with the President’s portrait which I knew would draw his attention,” he said. Mr Amunga was named ODM after the 2007 general elections because of his support for Mr Odinga.

He was a leader in the party’s youth wing and was tasked with mobilising grassroots support.

It is through this that he built a reputation for himself as a chief campaigner for various politicians seeking to win elective posts in the county on an ODM ticket.

However, the boda boda rider says that he has not reaped much from politics.

“It has even become difficult to buy books and pay activity fees for my children who are in public schools.

“Most of the times, I received hand-outs of Sh2,000 from the politicians which did not help much. I used to visit the governor’s office almost every month seeking his help. I have campaigned for him all this while but nothing has been forthcoming,” he said.

In his address to the crowd, Mr Kenyatta promised to visit the city in six months to check the progress of the projects he had launched.

Mr Amunga is now appealing to the President to visit the county again saying they were ready to meet him.

He has also promised to lobby the youth in the county support President Kenyatta come 2017.

“Since Kenya gained independence in 1963, we have never had (such) a kind and generous President like Mr Kenyatta.

I want him to know that we are fully behind him as the President of this country.

“I will vote him for the second term. Mr Kenyatta is the face of Kenya,” Amungo concludes gleefully.