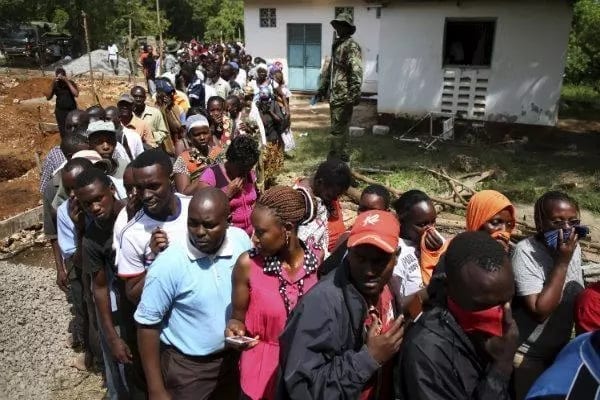 NAIROBI, Kenya Jun 20 – ONE of the Al Shabaab fugitives on the run after the Lamu attack was arrested on Saturday while seeking treatment at a hospital in Voi.

He is among 40 terrorists wanted after an attempted raid at a military camp in Lamu where 15 were killed.
According to the Inspector General of Police Joseph Boinnet, the suspect was seeking treatment for bullet wounds sustained in the gunfire with security forces.

He said detectives are interrogating the suspect as they seek to establish his real identity.

The National Police Service on Friday released photographs of 40 terror suspects wanted over last weekend’s attack, including a notorious German national Ahmed Mueller, who is said to be a key figure in the Al Qaeda-linked Al Shabaab terror group.

Police also believe he was the one behind the attacks in Mpeketoni that occurred last year when more than 100 people were killed.

“He is one of the few Western foreign fighters in Al Shabaab who survived Ahmed Godane’s purge. There are indications that he could have been involved in the Mpeketoni attack of June 2014. He is currently on the run, probably injured after the militia attempted attack of Baure military camp in Lamu,” a statement from the Ministry of Interior said.

Another suspect is Ramadhan Kioko aka Abu Nuseiba AKA Pinji who before joining Al Shabaab was a notorious pickpocket in the streets of Nairobi that earned him the alias “Pinji”.

In 2012, police said he managed to have his 10 year old son join him in Somalia, “where the poor young boy now aged 13 years still is.”

“Ramadhan Kioko is from Majengo Nairobi and is a close associate of Ahmed Iman. Kioko is married to Hawa who is also in Somalia; making them a complete family of Al Shabaab militants, a unique and rare situation in terrorism circles,” the ministry says.

Interior Ministry Spokesman Mwenda Njoka says most of the suspects may have sustained injuries during the weekend attack.

The suspects are believed to be battle hardened as they have frequently fought at the frontline with the Al-Shabaab militia.

Some in this list, such as Lukman Osma Issa and Said Hemed were killed.

Issa was one of the commanders of the groups that attacked Kenyans in Mpeketoni in June 2014.

According to the report, his brother Issa Osman Issa, an Al Qaeda operative in East Africa was part of the terror group that was involved in the Kikambala Paradise Hotel bombing in 2002.

The National Police Service has called on the public to provide any information that may lead to their arrest.