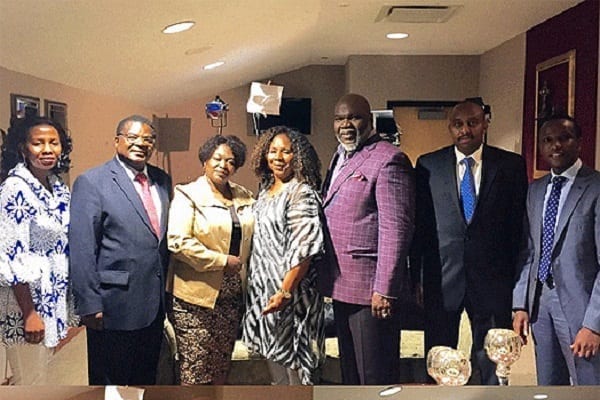 Kenyan ambassador to the United States Robinson Githae was on Sunday pictured alongside American mega-pastor TD Jakes of The Potter’s House after a service at the church.

TD Jakes, who once made offensive remarks about Kenya being poor but later apologised, posted photos of him, Ambassador Githae and their wives on Instagram captioning his excitement.

“Honored to have Kenyan Ambassador to the United States, His Excellency Ambassador Robinson Njeru Githae and his wife Alice Wanjiku Githae in service with us today at The Potter’s House! A delegation from #Kenya will also be joining us at Mega-Fest.com in August!,” read the caption.

In October 2013, TD Jakes had made an remark at his church in Dallas, Texas, during a sermon in which he said that some people in Kenya drink water because of his ministry.

The Bishop later apologised, stating that he regretted what he called a misunderstanding saying that; “It was only meant to communicate to his constituents that his love is for people as demonstrated through years of practical ministry.”

The Bishop made the Kenya comments as he attempted to distance himself from a new American TV reality series “Preachers of LA (Los Angeles)” which he lamented portrayed preachers in a negative light.

Robinson Githae was appointed Kenyan ambassador to the US in August last year.

Video: Only in Kenya-Rent-an-MP for Sh30,000, price for saving Kimunya