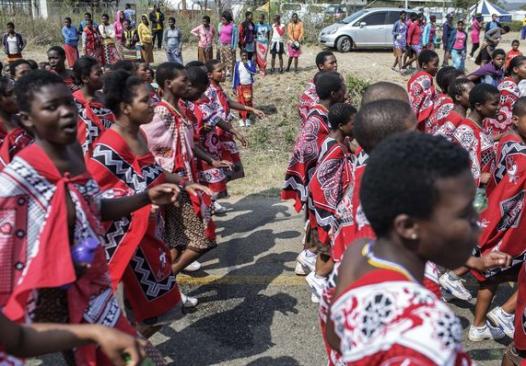 Thirty-eight teenage girls, described as being ‘virgins’, have reportedly died in a bus crash on the way to dance for an African king.

The young Swazi women’s death has reportedly led to calls prompted calls for the cancellation of Monday’s annual event.

The dance consists of tens of thousands of topless teenage virgins dancing for King Mswati.

The girls who died were among 50 teenagers travelling in a vehicle which struck a car that police escorts had directed to the roadside.

A second truck crashed into the first lorry from behind on a highway bridge in Matsapha, on route to King Mswati’s palace at Lozitha.

“According to information gathered, so serious was the accident that the tarmac was awash with blood, and critically injured imbali [maidens] were littered all over the place,” the Swazi Observer newspaper reported on Saturday.

On Saturday at least 38 people were reported to have died but this has yet to be officially confirmed.

The Swaziland Solidarity Network (SSN), a Pretoria-based pro-democracy group, called for the cancellation of the reed dance.

“We hope that the families of the deceased girls will hold the royal family accountable for the deaths of their children,” the SSN said in a statement.

As many as 80,000 maidens were planned to dance for King Mswati on Monday.

Some might reportedly be considered to be chosen as the polygamous king’s 15th wife.

The traditional annual event is a tourist attraction and will not be cancelled, government sources have said.