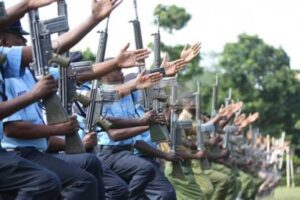 The Kenya Police Service is a successor of the muhindi police officers who guarded godowns storing equipment for building the Uganda Railway around the time when your great, great grandmother did not even know she was a woman.

That was during the 1887 to 1906 period – when President Uhuru’s dad was turning five.
These Indian officers and a few Somali inspectors, 150 in all, snaked from Mombasa towards the interior as the railway progressed and more stores needed guarding.

This was how the railway got its Railway police  unit. When the railway was completed, Kenya adopted the Indian Criminal Procedure Code and Indian Evidence Act as the basis of the earliest police force.
Here, though, are 10 things specific to the Kenyan police:

1. The left leg goes first
For a trained officer, the left leg will always be the first to be thrown in motion if an officer was in a standstill position, unlike us ordinary folk who don’t care which leg goes first.

2. Clockwise turn, always
When ordered by a police boss to make a turn, the movement of an afande is always clockwise – a right turn not a left, whether in uniform or civilian gear.

Unlike the usual protests by demonstrators on the streets, cops down their tools via sabotage: They jam communication gadgets such that the top brass could be sending messages which are not received by anyone, even though every officer will be at his or her station.

4. The boss eats first
The police boss is always the first to be served food at the high table before the rest of the pack. Even if the juniors are starving, they have to persevere until the green light is given that the boss has had his fill. It is protocol.

5. Over and out, Roger
Police have a particular way of using jargon, such as “Alpha Papa” in reference to Administration Police and “Kilo Papa”, which refers to the Kenya Police “Golf Siera Uniform” is the code for the dreaded General Service Unit, which Kenyans for long nicknamed Gusa Serikali Uone (GSU).

6. Rich cop, poor cop
It is an open secret that the Kenya Police Service officers are among the poorest paid cadre in the Civil Service, but amazingly, these measly paid cops also comprise some of the very rich Kenyans with investments in transport, real estate and hospitality financed through massive bribery syndicates.

7. Jungle sting gear
A junior cop on a regular patrol in the CBD is supposed to have two pairs of uniforms and boots and a pair of jungle outfit for sting operations, besides a ceremonial attire for auspicious occasions.

9. Armed to the armpit
Weapons are supposed to be surrendered to the armoury of a police station at the end of duty, shift or assignment – a mandatory requirement, which is generally abused, with many officers walking into bars and their houses armed. This is how they end up shooting their colleagues for sleeping with their favourite barmaids!

10. Honour among thieves
Cops have a way of banding together to protect their own, allowing for corruption and harbouring “rules don’t apply to us” mentality as they look down on civilians.