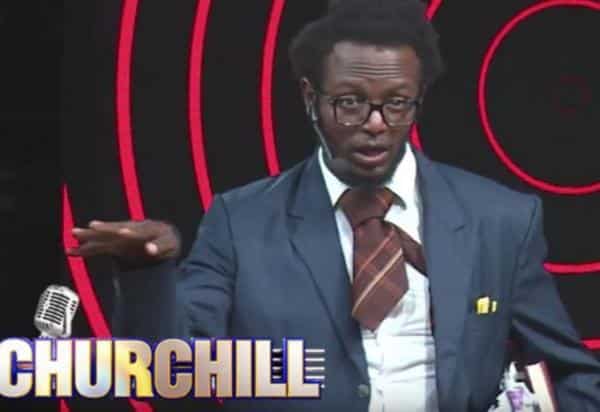 He is one of the more popular comedians to rise to the top most recently. Herman Kago, better known as Prof Hamo has become a household name thanks to his hilarious skits on Churchill Show.

Not long ago, he sat with SDE and gave an inside look into his personal life.

Check out his story:

Were you actually born in Nakuru?

I was born and brought up in Nakuru. In fact, I grew up in the military base in Lanet since my father was in the army.

So how did you make ends meet?

Video: Prof Hamo the Comedian Professor who dropped out of…

I started going to the Nakuru theatre, where I met many thespians. I didn’t know exactly what I wanted to do. I joined a band called Tamasha as a vocalist. This is like four or five years ago. But I still wasn’t happy. Most of the people I went to school with were doing well and had jobs.

Was the band paying you enough?

I was getting very little from a band that had about five people. So I started a mandazi business. I would cook them and transport them to the shops using a bicycle. That’s how I survived.

Well, it grew from one crate to several crates a day, but I was getting too tired. I didn’t have time to sleep or rest, because I was always cooking, transporting or going back to the shops to collect cash. I gave up on that. But I still sang in the band.

I learnt that they audition on Tuesdays in Nairobi, so when I first travelled to Nairobi last year to try my luck, the judges didn’t even listen to me. They just chased me out of the stage. I did not give up, I kept on going back to the auditions.

Had you tried comedy before?

Not at all. Even in school, I never did. I was very shy while in school, so I never tried things that would make me stand in front of people. The only thing that gave me confidence was being in a band.

What makes you different everyday as Prof Hamo?

I take daily life challenges and create the comical side. I listen to people, look at different situations that happen in real life and I make jokes out of that.

Lots of comedians who do very well tend to get greedy and start their own shows prematurely, what do you say about that?

Being in the band taught me about being patient in life. I believe I’m still learning now and I will continue to listen to mentors like Churchill. I still audition every Tuesday because I believe in learning new things every day.

Do you still live in Nakuru?

From Tuesday to Thursday I’m always in Nairobi and spend my weekend with family and friends in Nakuru. I love remaining humble, even with the new fame.

Tell us more about your family?

I am the fifth born in a family of eight. None of my siblings are in showbiz.