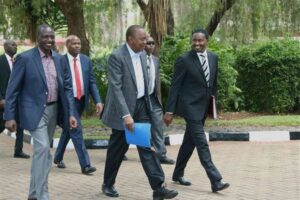 He is among the three Cabinet Secretaries who benefited greatly from this month’s reorganization of the government by President Uhuru Kenyatta.

Other Cabinet Secretaries are Adan Mohamed (Industrialization) and James Macharia (Transport and infrastructure).

The three Cabinet secretaries have received additional State departments despite having some of the key departments and institutions, a confirmation of President Kenyatta’s confidence in their leadership.

“The government will be organized in line with the constitution of Kenya as outlined herein. The order contains portfolio responsibilities and changes made in the structure of government. The order supersedes executive order No2/2013,” said the document.

Mr Mohamed will also now handle the International Trade which was previously under the foreign affairs Ministry headed by Amina Mohamed.

He also handled state departments for investment and industry with Principal Secretary as Julius Korir, Co-operatives with Ali Noor Ismail as the PS and Dr Chris Kiptoo being PS Trade.

Mr Macharia has been added State Department for Housing and Urban Development which was previously being handled by Jacob Kaimenyi at the lands ministry.

The PS for department Ms Aida Munamo will now report to Mr Macharia.

Other departments under him with PSs are: Nyakera Irungu (transport), John Mosonik (infrastructure), Nancy Kirigitu (Maritime and shipping) and Paul Mwangi (public works).

Prof Kaimenyi has now been left with Lands and physical planning whose principal secretary is Ms Mariamu El Maawy.

However, Mr Kiunjuri has lost the Vision 2030 Secretariat which was under planning Department and has now been moved to the Presidency.

The Agriculture, Livestock and Fisheries ministry headed by CS Willy Bett will have a new department to be referred to as Fisheries and blue economy headed by the PS Micheni Ntiba.

There are no major changes in the Office of the President, which has both the President and the Deputy President, and in the ministries of Interior and Coordination of National Government, Defence and National Treasury.

However, the Office of the Deputy President has been officially removed and, instead, been consolidated with that of the Presidency.