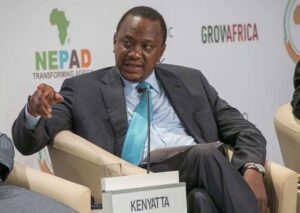 President Uhuru Kenyatta has held a meeting with senior Jubilee MPs to try and find common ground on the mounting clamour to change electoral laws, the Sunday Nation has learnt.

The meeting of about 50 members of the Jubilee alliance from the Senate and the National Assembly at State House, Nairobi, was held on Monday.

That was the same day Cord was staging demonstrations to try and force election commissioners out of office.

Cord has reiterated its plans to continue with demonstrations on Monday to push out the chairman and commissioners of the Independent Electoral and Boundaries Commission who they accuse of bias, corruption and incompetence.

An initial plan by Jubilee to mobilise its supporters to counter the Cord demonstrations appears to have been shelved.

The Justice and Legal Affairs Committee of the National Assembly was also reported to have started talks to break the deadlock over the electoral commission.

Multiple sources who attended the State House meeting, but who spoke in confidence, indicated the ruling coalition was digging in for a protracted fight with the Opposition.

They resolved that any engagement on changing the electoral landscape must be done through Parliament.

The process, it was agreed, will not involve the removal of commissioners from office.

“The process of removing commissioners is entrenched in the law, you can only do it through a petition to Parliament and a tribunal is set up. It can’t be any other way. We are interested in a national conversation, where people will ventilate, say what’s wrong and how it can be fixed,” said our source, a senior Jubilee legislator, who requested anonymity.

Further, there was an agreement that President Kenyatta will not agree to meet Cord if the ouster of the IEBC chiefs is part of the agenda.

Cord leader Raila Odinga said Tuesday that he had written to the President asking for dialogue to agree on the fate of the IEBC before the August 8 elections next year.

In the Monday meeting, Deputy President William Ruto chaired the first session and Mr Kenyatta joined them at midday. They had gathered at 9 am and left at about 2.30 pm.

STAY PUT
The decision by churches to weigh in on the debate started by Cord last month is said to have alarmed Mr Kenyatta, who had all along seen the push as the “usual politicking by the Opposition”, according to our source.

The Opposition has accused the electoral body of helping Jubilee rig the presidential vote in the 2013.

Cord claims the script will not be different next year claiming that top election officials have agreed to rig in favour of the ruling coalition.

Both Jubilee and the commission have dismissed the allegations as untrue.

The Kenya Conference of Catholic Bishops and the National Council of Churches of Kenya say strengthening the electoral commission’s capacity to conduct free and fair polls would be key to ensuring a peaceful 2017 General Election.

Foreign envoys, including United States, Germany and British have called for a sober approach.

During the State House meeting, Starehe MP Maina Kamanda was among those who took a hardline stance that there would be no budging while another camp coalescing around Runyenjes MP Cecily Mbarire was of the view that some aspects of reforms were needed to help tone down the political temperature.

Those in Jubilee who feel Mr Issack Hassan should leave are, however, in the minority.

The rest have adopted a hardline stance arguing that yielding to the demand to change the composition of the electoral commission would be emboldening the Opposition.

“What would be their next demand?” one of the MPs opposed to talking to Cord on the matter asked.

Mr Duale told the Sunday Nation that acceding to the Opposition’s demands would be tantamount to staging a constitutional coup.

“What Raila is saying is that we set aside the law which outlines how members of the independent commissions are hired and relieved of their duties to suit his ego,” he said.

The Opposition has indicated that it may boycott the elections should the Hassan-led team be the referee next year.

The meeting also resolved that if Cord agrees to the parliamentary route, a select committee would be set up to handle the matter.

“We want to bring other members with a national profile who are not necessarily members of the legal committees,” said a senator who attended the meeting.

KEY ISSUES
Unlike parliamentary legal committees which are restricted in their mandate by Standing Orders, a Select Committee would have the authority of both Senate Speaker Ekwe Ethuro and his counterpart from the National Assembly Justin Muturi.

The move to have Parliament take the lead is seen as setting the stage for what will be an acrimonious exchange with the Opposition as Jubilee is sure to have its way in the bicameral House, given its numerical strength.

And to cement this, just two days after the meeting, Mr Ruto, who was in Gatundu, said they are ready for dialogue, but only anchored in the Constitution and through parliament, echoing resolutions of the Monday meeting.

The meeting resolved that views will be collected from all stakeholders including political parties, the electoral commission, religious organisations, civil society, among others in what will be called the “National Conversation” and not national dialogue as Cord has proposed.

The MPs also agreed that Jubilee should not be seen as defending the embattled commission as doing so would reinforce the position held by the Opposition that it favours them.

Members of the ruling coalition also discussed the fate of the collapsed Gender Bill with President Kenyatta and his deputy expressing their disappointment at the inability of the House leadership to marshal numbers to push it through.

Even after appeals by President Kenyatta and Mr Odinga, the Bill failed to garner the requisite 233 votes having first got the nod of 195 members.

This number fell to 178 in the second round of voting. The National Assembly has 349 MPs. “We explored the possibility of adopting a bipartisan approach to pass it (the Bill) before it was too late,” Majority Whip Katoo ole Metito said.

With both Jubilee and Cord taking opposing stances, the country is in for a long drawn showdown on whether the electoral commission should be reconstituted or not.

VIDEO/PHOTOS: 32 people killed in the Patel Dam tragedy in Nakuru