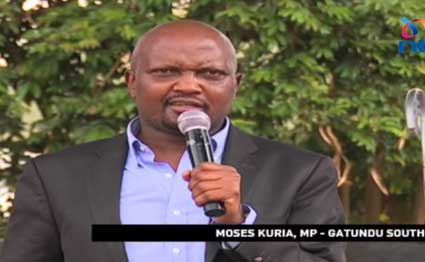 MPs who had been locked up on charges of hate speech agreed to hold peace meetings across the country in a bid to unite Kenyans ahead of the next elections.

Two of them revealed on Sunday that they would be part of a peace caravan they had agreed to lead during the time they were in a cell at Pangani police station awaiting their charges.

Gatundu South MP Moses Kuria and his Kabete counterpart Ferdinand Waititu struck a conciliatory tone on Sunday when they said they had agreed not to incite Kenyans against each other again.

They said the caravan would move from county to county, preaching peace and unity messages.

Speaking at Gatundu stadium, Mr Kuria said they learnt a lot about the importance of peace among Kenyans when they shared a filthy cell together.

“In the cell, there was no Jubilee or Cord. We faced similar challenges and talked to each other.

“We felt a similar hunger because there was no food,” said the MP, who is out on bond.

He said he spoke with Cord leader Raila Odinga, and agreed that the lawmaker visit him and have “ugali and samaki” this week.

The MPs, together with their colleagues Mr Timothy Bosire (Kitutu Masaba), Kimani Ngunjiri (Bahati) and Johnson Muthama (Machakos senator) were locked up for three nights as they awaited police to complete investigations before charging them.

Mr Waititu said they all agreed not to talk ill of any tribe but to strive to reach out to each other all the time.

“Being in the cell was quite tough for all of us. You sit, you stand up but it was still so uncomfortable. If this is what it will take for Kenyans to unite, then, so be it. We have learnt a big lesson that we will not forget,” he said.