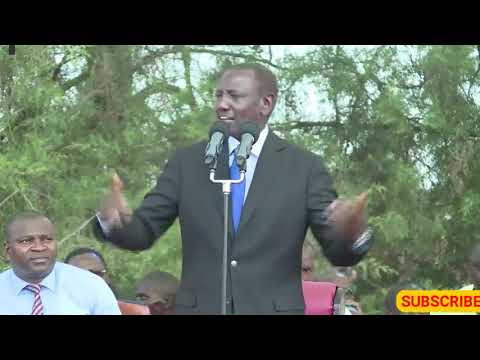 Deputy President William Ruto has urged leaders to embrace political realignments saying it is a reflection of democracy and a globally accepted practice.

The Deputy President noted that issues such as good policies, fair play and progressiveness of a party attract those discontented elsewhere.

“Changing one’s allegiance or alliance is normal and should not be viewed as a result of compromise or inducement,” he said.

Ruto said leaders were free to make political decisions and that should not be construed to mean that they have been induced.

“It is only slaves who cannot change their minds. Any person in this 21 st century who still believes in slavery believes in something of the past,” he said.

The Deputy President was speaking at the Masii Catholic Church in Mwala Constituency, Machakos County, during the Sunday sermon.

He took issue with leaders who are bent on criticizing the government for working with leaders from across the political divide in addressing the challenges facing the country.

Ruto said the government would continue working with leaders irrespective of their political affiliations.

He further pointed out that it is a constitutional right for all Kenyans to access government services regardless of their voting choices.

Ruto observed that opposition leaders who want to work with the government do not need permission from anybody, terming such an analogy as primitive.

He noted that it is unbelievable that some leaders were opposed to those keen on initiating development projects that can transform the lives of Kenyans.

“People who are opposed to leaders engaging in talks or sharing development ideas remind us of slavery where slaves must get permission from their masters,” Ruto said.

The MPs vowed to work with the Government in exploring ways of solving the problems facing the people.

Munyaka and Musyoka said the Kamba community was ready to work with the government for the sake of development.

The leaders said the challenges facing the community like poor infrastructure and water shortage would only be solved by the Jubilee administration.

“I want to ask the Kamba community to make informed choices this time round by supporting the Jubilee administration for the sake of development in our region,” Munyaka said