In public, Kenyan politicians talk a big game to show they are rivals. They rally the electorate to vote for them while badmouthing their counterparts.

But, away from the public eye, these rivals are friends. They dine together, they do business with each other and their families hang out together.

At this point, the electorate is left fighting, acting like sycophants- fighting each other for the sake of a politician’s career while the politicians themselves are safe and only care about themselves.

Here are the instances Kenyan politicians set aside their rivalry for ‘friendship’ as Kenyans fought their street battles: These two have been rivals over who would win the presidency in the 2017 General Election. In August 2016, Duale was quoted saying that Jubilee will win the election, telling Raila that “ If God has not decided for him to be Kenya’s president, then he cannot force himself on Kenyans”.

Raila has always sought to know the source of DP William Ruto’s wealth, claiming that Ruto was the godfather of corruption in the government.

Raila has also been known to support Governor Isaac Ruto in his fight against DP Ruto, therefore, cementing the enmity between the two of them

Cord leader Raila Odinga with Justin Muturi and Aden Duale at the National Assembly buildings on Tuesday, March 15. Raila will sit in on the historic vote on the Gender Bill

Three months ago, Raila expressed anger at how National Assembly Speaker Justin Muturi failed to recognize his presence when he and his daughter Rosemary visited Parliament buildings.

At the same time, Muturi recognized visiting Ugandan parliamentarians in the public gallery.

The second time these two have gone head to head was when Muturi snubbed orders to allow Ugunja MP Opiyo Wandayi back to the house. Raila threatened to demonstrate against Parliament and Muturi relented.

Nairobi Senator Mike Sonko is planning to unseat Governor Evans Kidero from his seat. On numerous occasions, the two have clashed over matters concerning the Sonko Rescue Team project.

The two have, however, come together to mourn each other’s relatives including Sonko’s father. 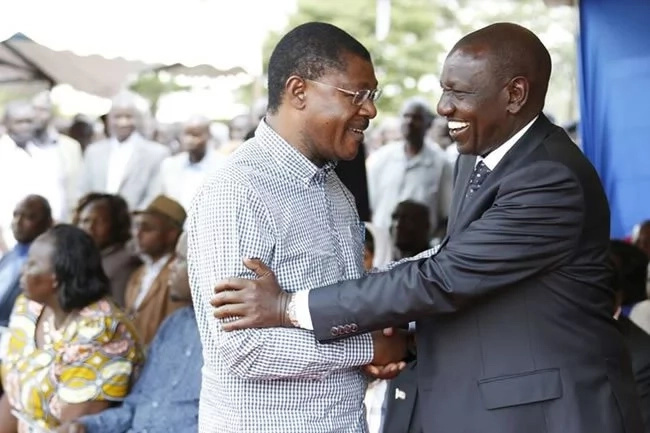 By virtue of being in opposing coalitions, the two are separated by a political divide. Ruto has, however, been known to attempt to extend an olive branch to CORD co-principal Moses Wetangula to join the Jubilee government, and at all times, Wetangula refused.

Wetangula has also been known to touch on corruption scandals that DP Ruto was alleged to be a part of.

Governor William Kabogo and DP William Ruto hugging each other at a function in Kuresoi. Ruto said Kabogo only advised him to look for votes all over Kenya. Image: DPPS

Kiambu Governor William Kabogo at one time went on record telling the deputy president not to campaign in Mount Kenya regions because people would not automatically vote for him just because he is a Jubilee leader.

Kabogo drew ire on himself from leaders in the same region. 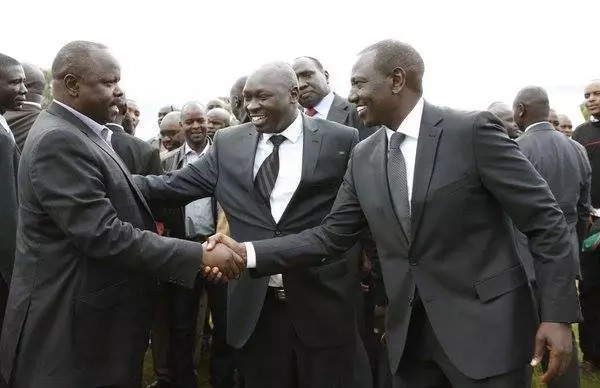 DP Ruto and Bomet Governor Isaac Ruto started out as close friends but their political rivalry sent their friendship to the pit.

Governor Ruto has been known to block Ruto’s projects from being implemented in the Rift Valley region including a KSh 800 million university.

The two coalitions have been battling it out in the run up to the 207 General Election.

CORD is of the opinion that Jubilee rigged himself into power in 2013 and are aiming to remove them from power in 2017.

The political divide between the two has left government-appointed leaders clashing with legislators from the opposition coalition.

At times, Joseph Nkaissery, the Cabinet Secretary for Interior, has clashed with CORD legislators on matters security especially during the anti-Independent Electoral and Boundaries Commission boundaries demonstrations.