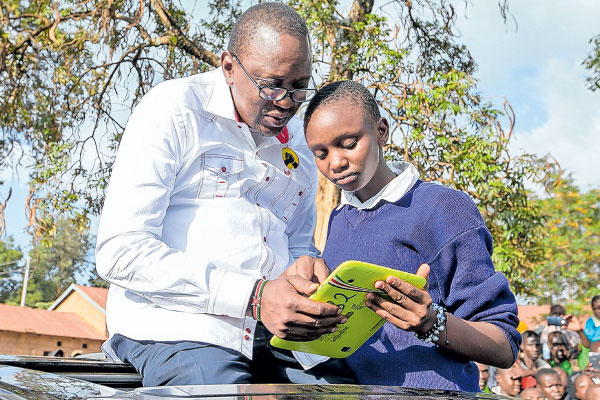 Every morning, for the last 10 days, President Uhuru Kenyatta’s official Facebook and Twitter pages featured a map indicating where the Jubilee Party heads would be spending the day.

The template for the image is a photo of the President being a literal Jubilee Party flagbearer and his running mate, Deputy President William Ruto, looking on next to him, clapping.

The rest is a map with a series of pins indicating where the two will be that day.

The President and his deputy also passed through 10 locations in Uasin Gishu County that day.

The following day it was the Naitiri Catholic Church for a service and then Kamukuywa, Kimilili, Chwele, Mayanja, Kanduyi and then a rally at Posta Grounds.

On June 12, it was the turn of Nandi, with 12 locations for the stopovers, and on June 13, five locations in West Pokot.

There is a map for every day since then, the latest being for Sunday.

Monday was a day for rest and there was a new map on Wednesday morning as the two leaders headed to six Mt Kenya counties.

In Kiambu on Sunday, there was a slight detour from the map on the part of the President.

After a church service at St Peter and Paul Catholic Church in Kiambu Town, he turned back towards Nairobi. Mr Ruto continued up through Kiambu Town and on to Ndumberi, Ting’ang’a, the junction to Githunguri and then back south through Kwa Maiko to Ruiru.

President Kenyatta headed back to attend a prayer service at the Nyayo National Stadium.

The service was attended by more than 4,000 members of the Akorino Church.

By the time the Deputy President made a stopover at Ruiru, the President was ahead of him and then caught up with him at Thika Stadium, the final stop for them and the venue of the rally.

The two leaders have been on the road almost every day since they presented their nomination papers to the electoral commission in May.

So intense has their campaign been that official events have had to be fitted around it, with President Kenyatta finding time last Saturday to officially receive five envoys.

He has also been making use of the State lodges, sleeping in Eldoret when his tours ended in locations close to the town  and at the official residence in Kakamega when the need arose.

On three occasions, a member of his team told the Nation, the public meetings ended after 7pm.

Mr Raphael Tuju, who heads the Jubilee secretariat, said the plan is to keep the campaigns at that intensity throughout the time allowed by the Independent Electoral and Boundaries Commission.

“One of the things that has been a disadvantage for the President is that for the last four years or so, his opponents have been holding rallies and the President has been working.

These 60 days is the only time that he has dedicated to actively doing politics,” said Mr Tuju.

Throughout the four years, most of the Jubilee bosses’ active forays have been into the Coast and western regions.

In the current tours, they have also tried to strategically avoid creating conflict. Mr Ruto did not accompany the President in the tours of Kisii and Nyamira, where he is an unpopular figure, and in West Pokot avoided being in the company of Prof John Lonyangapuo, with whom he has clashed before.

How To Flourish: Tips On Available Raw Materials To Survive