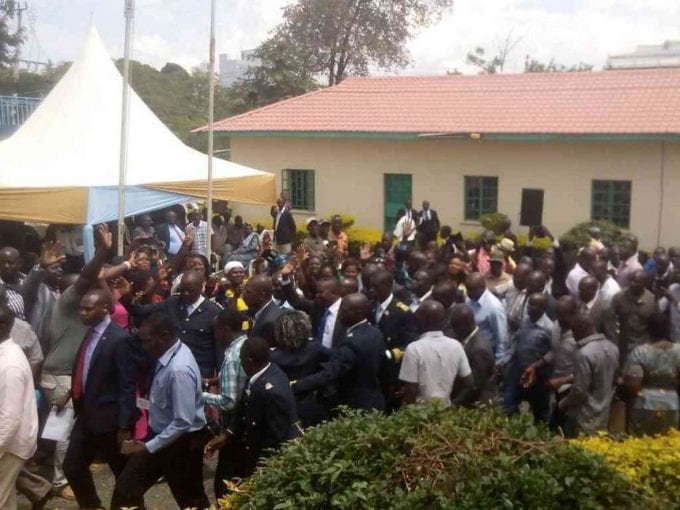 Oloo won the seat in the first round of the election with 32 votes, beating Ken Amondi who came second with 11.

Former speaker Ann Adul was third with five votes while the other three contestants did not get any votes from the 48 MCAs.

The three are lawyer Sala Jared, Cynthia osiro and Peter Omollo. who vied for governor.

Omollo dropped his bid for the top seat on a ticket by Amani National Congress ticket in support of Anyang’ Nyong’o who won the race.

After defecting from Jubilee to ODM, Oloo vied for Kisumu Central MP but lost in the April primaries to former Gem MCA Fred Ouda.

PHOTOS/VIDEO: The late Joyce Laboso to be buried in Kisumu

He moved to Opposition leader Raila Odinga’s Orange party after President Uhuru Kenyatta and DP William Ruto left him out of the Jubilee Party team formed in September last year.

His contract as chairman of the Lake Basin Development Authority was also not renewed last year.

The politician was reportedly promised a Cabinet Secretary post after Uhuru rose to power in 2013 and later an ambassadorial appointment to the UK. These never came to be.

In his acceptance speech, Oloo praised Adul and county assembly staff for the manner in which the vote and pre-inauguration ceremonies were conducted.

The new speaker assured assembly members of his support in the oversight role. Out of the 49 MCAs, only three were re-elected.

Oloo also assured Nyong’o the assembly will do its best to ensure devolution succeeds in the county and that promises in manifestos are fulfilled.

He further said he will rally MCAs to campaign for Raila ahead of the October 17 repeat presidential contest.

Only six people beat the deadline for submitting their nominations papers. They had to give the newly elected MCAs reason why they deserved the job.

A source in ODM party, which has majority MCAs, lobbied for Oloo ‘s election.

Railways ward representative Kevin Arao said people should expect a difference in this assembly unlike the last one, which gave their leader Raila Odinga a tough time in the quest for peace and unity.

That assembly had been plagued by wrangles since 2013 when the speaker and former majority leader Samuel Ongou’ fought over corruption allegations.

This made it difficult to enact laws and there were views that the positions of speaker, majority leader, minority leader and clerk were undermined.

Adul survived three impeachment attempts and at one point, there was confusion after two people occupied the position of the clerk. Both Ben Opiyo and Philip Adundo claimed they were the bona fide office bearers

The assembly was also criticised for alleged misuse of taxpayers’ money to finance costly trips by MCAs and county staff.

Former deputy speaker Pamela Omino was hospitalised after suffering injuries during chaos at the assembly.

Raila had to intervene to stop the wrangles.