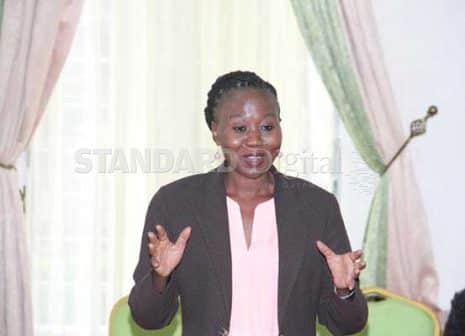 Electoral commissioner Roselyne Akombe is said to have left the country on a mission to inspect the printing of ballot papers at the Dubai-based printing firm, Al Ghurair.

This was apparently an excuse to leave the country, given the requirement that top State officials must seek clearance from the State for foreign travel.

Before her resignation and departure, Akombe had toured the Nyanza and western Kenya regions last week as the commission trained officers to handle next week’s elections.

That she was going to flee was not a surprise to many; some say it was just a matter of time.

She and another commissioner, Abdi Guliye, were leading a delegation to be part of a team that is in Dubai to monitor the printing of ballot papers by Al Ghurair.

Raila Reveals He Had Frequent Private Communication With…

Shebesh rebukes Akombe, claims she worked for NASA or…

US Radio tells Akombe half of Kenyans view her claims as…

She flew out on Monday at 10pm to Dubai but she never checked out of Dubai International Airport.

She left Dubai for New York on Tuesday morning, from where she sent her resignation letter.

On August 16, she was ordered out of a plane at the Jomo Kenyatta International Airport while on her way to New York. IEBC downplayed the incident, terming it a ‘delay’.

Sources, however, told The Standard that some State operatives feared Akombe, who holds both Kenyan and US passports, was fleeing Kenya.

Reports indicate that it took the intervention of the US ambassador to Kenya, Robert Godec, for her to be cleared to travel.

Akombe, referring to claims that she was fleeing the country then, said she was deeply concerned at statements attributed to her on her departure, saying they were completely false and unwarranted