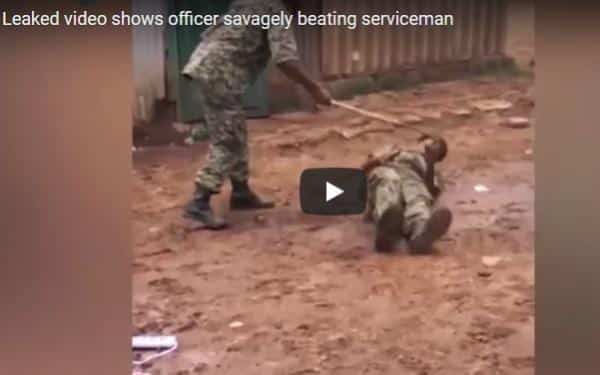 An undated video of an officer beating a serviceman has gone viral on the interweb. In the 66 seconds long video, a uniformed officer is seen shouting in Swahili and mercilessly beating a man dressed in uniform using a wooden stick.

“Jipake kwa uso haraka haraka. Enda chini, sijaona kitu umepaka kwa uso,” (Quickly smear the mud on your face! Lie on the ground! I am yet to see what you have smeared), shouts the officer in Swahili as he beats the serviceman.

The serviceman keeps rolls in the mud as the beating continues.

The video shows other officers passing by going about their normal business of the day. They appear unfazed, only glancing at the scene before continuing with their activities.

As the beating continues, the officer asks the serviceman if he owns anything in a pile of what looks like electronic cables that are lying on the ground.

“Charger gani?” (Which charger)?” the officer barks at the serviceman who keeps rolling on the ground as he is beaten.

“Kwa nini unatoroka wakati mimi nakuita? Ulikua umewachia nani simu akuchungie?” the officer asks towards the end of the clip. (Why were you running away when I was calling you? Who have you given your mobile phone to keep for you?)

Sources familiar with paramilitary training have told Standard Digitalthat the video could have been recorded at a National Youth Service (NYS) training camp as the uniform is similar to what NYS officers and servicemen wear.

Standard Digital reached out to a parent who has a son at the NYS for comment on the video, confirming that NYS servicemen are not allowed to have personal mobile phones in the training camps.

“I wouldn’t know (if servicemen are beaten),” she said.

Her son is on a six month training at the NYS Gilgil camp.

“I talk to my son twice a month. They are normally offered phone services since they are not allowed mobile phones. He seems happy and enjoying the programs. He only complains of hunger,” she added.

The video brings into the fore the ferocity of punishment and treatment meted on servicemen in Kenyan camps during training.

Emmy Kosgei to be a Mum Soon