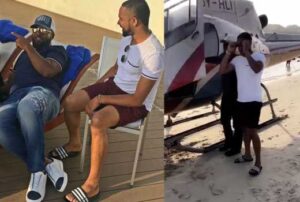 Mombasa Governor Ali Hassan Joho has bought a brand new chopper to ease his movements across his vast county.

Gaddafi stated that Joho acquired the chopper in order to fulfil his busy schedule that saw him land recenttly  at the sands of Pirates Beach and Mama Ngina during the celebrations to welcome the New Year, 2018.

He added that Governor 001 accompanied by his close ally Kilifi Governor Amason Kingi held a candid discussion with several artists at the coast on how to broaden and assist the industry this year.

Joho, in photos, seen by SDE was seen hanging out with Anto Neo-Soul, Akothee and Victoria Kimani in what was said was a discussion on artist welfare, women issues and how to further cooperation between his government and the industry.