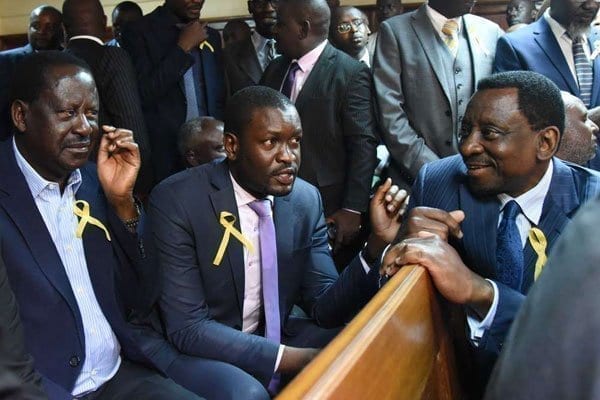 The deportation of fiery lawyer Miguna Miguna to Dubai on Wednesday night has put to a stern test opposition leader Raila Odinga’s political future only three weeks after he and President Uhuru Kenyatta closed ranks to ease political temperatures in the country.

The brutality unleashed on Dr Miguna and his team of lawyers over the three days he was detained at the Jomo Kenyatta International Airport (JKIA) has sparked murmurs of discontent in Mr Odinga’s camp with some of his close allies accusing the government of betrayal.

The first-hand humiliation at the airport when Mr Odinga was shoved aside as he tried to intervene and stop General Service Unit (GSU) officers from whisking Dr Miguna away is said to have taken him aback.

COOPERATION
His allies are now asking that he rescinds the cooperation with Jubilee even as a section of the ruling party supporters celebrates the new turn of events.

In the eyes of his supporters, Mr Odinga was subjected to ridicule by the State.

“I am wondering how beneficial the handshake was going to be to us if it could not secure Miguna’s freedom,” Kakamega Governor and Mr Odinga’s deputy in ODM Wycliffe Oparanya said.

Some of his close allies now believe it was a well-choreographed move to embarrass Mr Odinga as others argue that it was a mistake in the first place for the opposition leader to have gone to the airport to receive his former adviser-turned- foe-turned-ally.

“We now want a structured cooperation, if we must have one at all.

“It is almost a month and the two-man committee we were told would come up with the programme has yet to say a word. We are being taken for granted,” Mr Oparanya said.

SUPPORTERS
But as his supporters persuade him out of the deal, Mr Odinga must carefully weigh options at his disposal.

Does he bolt out or wait for the storm to calm and continue working with President Kenyatta?

And were he to go back to the trenches, will he be in a position to take all his supporters with him?

Some are already asking questions on the move and, for the first time, many in his own Nyanza home turf are doubtful about the wisdom behind his political move.

These are people who have religiously backed him before.

NASA LEADERS
The fallout in the Opposition coalition Nasa pitting him against his co-principals Kalonzo Musyoka, Musalia Mudavadi and Moses Wetang’ula does not offer Mr Odinga safe landing in the event of his bolting out of the deal with President Kenyatta.

With the trio accusing him of betraying the reform cause, it may appear that Mr Odinga has little chance of cobbling up the outfit together with matters made worse by the ouster of Mr Wetang’ula as minority leader in the Senate.

Having run out of viable options, Mr Odinga is said to have considered working with the government as the best way out of the impasse the country had found itself in.

On the deportation of Mr Miguna, Mr Odinga’s associates, including Mr Orengo, hold that the buck stops with President Kenyatta.

The Siaya senator said the President was taking Mr Odinga’s gesture for granted.

“Raila (Mr Odinga) has given everything but Uhuru (Mr Kenyatta) has given nothing,” he said.

A State House source, who spoke in confidence, defended President Kenyatta over the Miguna saga, saying that some “decisions” could have been taken without his knowledge “to preserve the State”.

In such instances, the President is later taken through what informed the decisions, the source said.

CONSULTATION
State House Comptroller in the Kibaki administration Matere Keriri once admitted that there were occasions that the President’s men act without consulting him.

But he quickly added that for decisions with far-reaching consequences, the Head of State must be briefed as soon as possible.

“Ministers and those exercising delegated function have full responsibility. Even on occasions that the President is around, they do not have to consult.

“The general rule, however, is to make the best decision in one’s opinion and ensure the President is kept informed,” he said.

In the current state of affairs, Deputy President William Ruto is believed to be uncomfortable with Mr Odinga’s dalliance with his boss.

An ally of Mr Ruto told us that the Deputy President sees it in terms of upsetting the power balance.

2022 ELECTIONS
Mr Odinga is a domineering character and Deputy Senate Speaker Kithure Kindiki, a man who hopes to pair up with Mr Ruto in the 2022 presidential polls, warns that Jubilee must be careful in its dealings with the Nasa leader.

“We know his history in politics and that is why we are cautious.

“When a section of the road has had many accidents, safety authorities always put up warning signs.

“Mr Odinga should understand that Jubilee has political commitments it intends to keep,” Prof Kindiki said.

STABILITY
Those opposed to the Kenyatta-Odinga handshake within Jubilee will hear nothing of the newfound friendship.

To them, this is the man who was almost running away with the ultimate prize last year.

“How then do you embrace him before we even get down to massage the wounds of war,” one of those opposed to the deal posed.

But National Assembly Majority Leader Aden Duale said that in agreeing to work together, Mr Kenyatta and Mr Odinga had decided to put the interests of the nation above everything else.

“They are simply saying that the interests of the country supersede those of an individual or party; that should be the way to go,” he said.

GAME PLAN
Another high-ranking Jubilee official allied to Mr Ruto admitted that they were wary of Mr Odinga’s game plan.

“The truth is we are a bit jittery. Were we to be consulted, I can assure you the handshake would not have taken place,” the politician, who also sought anonymity, said.

The fact that Mr Odinga kept his key allies in the dark over the handshake has brewed internal rebellion with some of them doing everything to sabotage it.

Mr Odinga thus finds himself in the crossfire, first from his own camp and secondly from elements in Jubilee opposed to his move to work with Mr Kenyatta.

But in the country’s political architecture, Mr Odinga is known to possess the power to wriggle himself out of difficult situations.

KANU
When he led his National Development Party into cooperation with Kanu on March 2002, some observers wrote Mr Odinga off, maintaining that his party had been swallowed by Kanu, only for the opposition chief to have the last laugh after leading a mass exodus out of the then ruling party to form the National Rainbow Coalition, which clinched that year’s presidential election.

Again in 2007, he reinvented himself, having fallen out with President Mwai Kibaki during the 2005 referendum on the Constitution.

He crafted a formidable outfit that almost sent Mr Kibaki home at the polls.

They ended up sharing power in a grand coalition arrangement.  The only difference now may be age.

At 73, he may not have as much energy and room to manoeuvre.

Why Miguna Miguna is in trouble with State

Word of the Day:Passion and commitment is all that matters.

Lupita Nyong’o and David Oyelowo in discussions for ‘Queen of…

Word of the week:Truth is a person