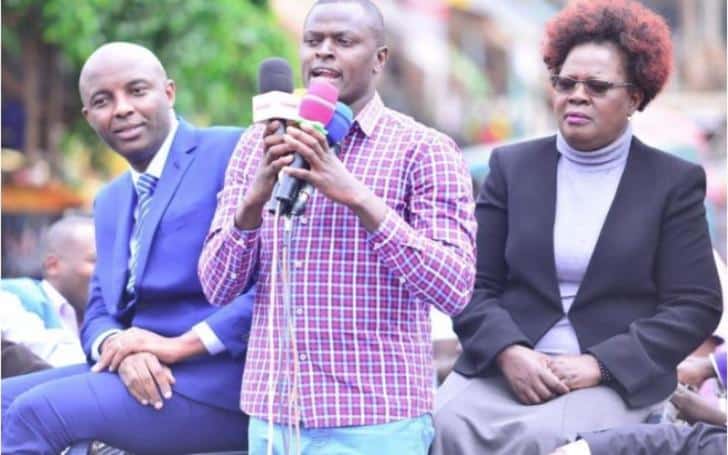 BABA THEY ARE HERE: Kiharu MP Ndindi Nyoro is on the receiving end of sharp criticism from Kenyans online after a failed attempt of the viral Julius Malema Challenge at the requiem mass of the late Kenneth Matiba.

The lawmaker in his written speech addressed Matiba as Baba just as Malema had addressed the late anti-apartheid hero Winnie Mandela as Mama.

Ndindi further mentioned that some of Matiba’s tormentors were present at the service and pretending to be mourning.

“Baba Matiba during your unlawful detention a feather was picked from your heart and a pile of chapters expunged from Kenya’s history. But you taught us, Baba Matiba, to always speak the truth and I’ll speak that truth now.

“Some of your enemies Baba, some of your tormentors are here and others are watching masquerading as mourners, hypocrites with empty semblance of righteousness donning robes of sanity.

PHOTOS: Ruto use free time to drive around after cancelling…

“We demand that they seek forgiveness from God with the family and with the Kenyan people. Truth is the first chapter of reconciliation,” the MP said.

Ndindi further pledged that the young people shall not let Matiba’s struggle be in vain.

“But Baba, when we as your sons and daughters, grandchildren and the future generations are the ones enjoying fruits of your second liberation won’t be hypocrites like them. We will choose to speak the truth without reserve and always will vouch for it. Lastly Baba, we are grateful that you came not like most of us but you came for a specific life assignment.”

The speech was strikingly similar to the one by the firebrand South African politician, and Kenyans online took notice and made their opinions known.

On Twitter, one Hillary Kiplagat wrote: “Ndindi Nyoro…..struggling too much to be relevant. There is nothing that nauseates, shy’s and dissappoints[sic] like outright plagiarism.”

On Facebook, Alvan Kinyua, wrote: “Lakini wacha tuambiane ukweli Wangwana….At K.S.N. Matiba’s funeral service that has ended a few minutes ago in Murang’a, Kiharu MP Ndindi Nyoro’s attempt to do a #JuliusMalemaChallenge has flopped terribly…This one has refused to work for Hon Ndindi … Completely! Copy pasting can be catastrophic!”

On the same platform, Benmark Nganga described Ndindi Nyoro as “a fake wannabe.

Kenyan woman has passed away in Maryland