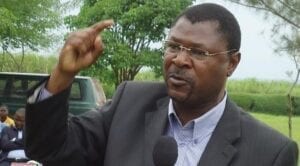 Our marriage and political engagements with ODM leader Raila Odinga has ended and will not be renewed by any means, Ford Kenya party leader Moses Wetangula has said.

Wetangula said he has cut all his links with Raila whom he termed as a traitor to his NASA colleagues.

He said he will now focus on his journey to State House after elders from the neighbouring Sabaot, Tachoni and Teso communities backed the idea.

“My friend Raila, I have no hard feelings for you but our journey with you is over,” Wetangula said.

The senator said the Mulembe community was no longer going to allow Raila to use him and ANC leader Musalia Mudavadi to gain the support of the region.

“We are telling him (Raila) everyone has his home and his people. That is the nature of Kenya,” he said.

“I’m praying that our people and leaders from Western region will join hands to ensure that we speak as one voice so as to gain respect from other communities.”

Wetangula made the remarks on Saturday while addressing mourners at Mukhweya village in Kabuchai constituency of Bungoma County during a funeral service of the late major retired Boniface Wenani.

Wenani, 94, was a former world war soldier who also helped treat wounded soldiers during the war.

Wetangula said the Mulembe community was not happy with his recent dethroning from the Senate Minority leadership post which he believes was orchestrated by Raila.

“We are no longer going to allow people to use us to get to the top and while there, they start urinating on us,” Wetangula said.

The Ford Kenya boss and Mudavadi have in recent days hinted at merging their parties to form a single Luhya party to improve their chances at the presidency in 2022.

The two leaders said they are already in talks with other political leaders in the region and the merger will be announced at the right time.

Their apparent fall-out with Raila emerged after Raila’s handshake with President Uhuru Kenyatta on March 9.

The NASA principals said Raila never informed them about the unity pact and accused him of pursuing personal interests at the expense of NASA’s principles.

He said Raila sneaked from them like the biblical Nicodemus and went to meet Uhuru to negotiate for his political retirement and forgot about the issues NASA was advocating for.

The senator said that they, as Ford Kenya, have recognized Uhuru as a legitimate president but want national dialogue that will help the country heal and move forward.

“We want the talks to be national so that even the El molo and the Makonde should come for the talks as they are also part of this country,” Wetangula said.

He asked Bungoma residents who do not have voters’ cards to register and asked chiefs not to harass those with wives from neighboring Uganda by demanding for title deeds before they register them.

He said he will embark on a nationwide tour to seek support from Kenyans of goodwill to back the Luhya community’s presidential bid.

“We will go to Central, Nyanza, Rift valley, and Turkana and everywhere,” Wetangula said.

He said Raila has used Luhyas for a long time without returning the favour and will now be treated as an enemy of Mulembe nation.

He said his ouster from the senate minority leadership post is akin to how Raila used and betrayed former vice President Kijana Wamalwa, Mudavadi and DP William Ruto.

“They all went ahead to become vice presidents. He has now hit me with the same rod, I will jump even higher than the three and capture something bigger,” Wetangula said.

He said he has, together with Mudavadi, decided that the Luhya unity was the only way out.

Wetangula said the unity will send shivers to those that have been using the Luhya community as brokers.

“We are asking our people who are the second largest in population that if we want to be respected we have to come up with one political party that will unite all of us and earn us respect from our neighbors,” he said.