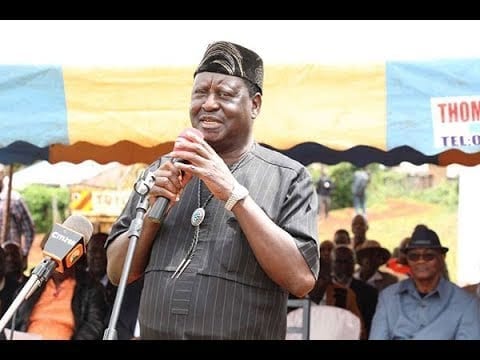 NASA leader Raila Odinga on Monday held a meeting with elders from the Luo community.

During the meeting, Raila discussed with the elders matters relating to his recent meetings with former President Mwai Kibaki, former President Daniel Arap Moi and his famous handshake with President Uhuru Kenyatta.

After the Uhuru-Raila handshake at Harambee House in Nairobi, the two leaders declared a truce and pledged to unify the country after the prolonged electioneering period.

Luo Council of Elders chairman Mr. Willis Otondi welcomed Raila’s move, citing the need for the country to move forward as a united front. “We have been told about the details of the handshake and we endorse it to the fullest,” said Otondi. Speaking at his Bondo home in Siaya County, Raila reiterated the need for a united Kenya, downplaying speculations that the handshakes are politically motivated.

The NASA leader is expected to address the over 6000 delegates at the 5th Annual Devolution Conference in Kakamega.

DFI WOMEN CONFERENCE IN MARYLAND-REKINDLING THE FIRE IN YOU