Miguna Miguna has responded to Raila in one of the most controversial tweets.The self-imposed NRM leader heard what Raila said in South Africa and gave this response:

The Kenya High Commission in Ottawa is like a pit latrine without a toilet paper at your local village,yet in his selling FAKE BRIDGES DESPERATION Raila Odinga misleads his sycophants that it can override tyrannical decisions  made in Nairobi”

Raila had insinuated that Miguna refused to hand over his Canadian passport for stamping. He added,”even after being presented with forms to fill,he tore them”.

Miguna did not take Raila’s words lightly.And in a record,he has written a book about Raila which he will launch this year.The book will reveal  ore secrets about Raila and the evils the opposition did before and during elections.Miguna will claim Raila lost the August 8 elections fairly. 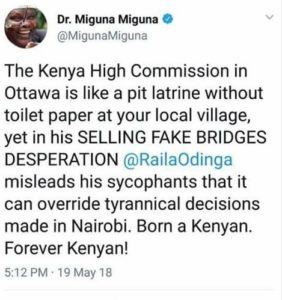