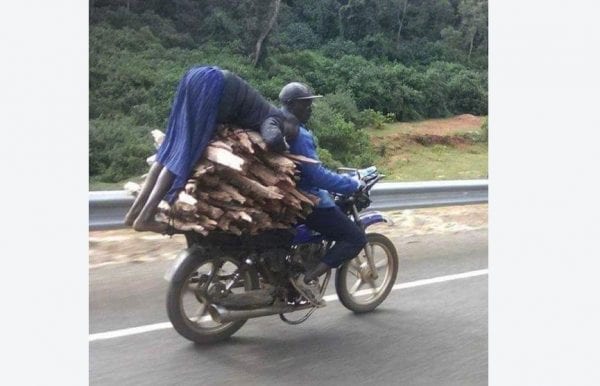 The story of 13-year-old Faith Jepchirchir, photographed above in a risky boda-boda ride, and whose plight was highlighted in The Standard last week, has touched the hearts of Good Samaritans.

Jepchirichir, a class five pupil, had perilously hunched herself over a pile of firewood that was being ferried in a motorbike in Elgeyo Marakwet County. Her photos circulated on social media  went viral.

She had walked several kilometres to assist her 70-year-old grandmother, Lilian Kobilo, fetch firewood in Kamotony Forest in Kapsowar, which the granny sells for the upkeep of Jepchirichir and her two siblings.

The bod-boda operator had offered to transport the firewood freely for the granny who had been stranded with the heavy load for hours. Rather than a trudge home, Jepchirichir settled for the near-suicidal ride.

Amid the trolling and excitement that was all over social media about the ride, The Standard team chose to highlight Jepchirchir’s plight. And it was a story of  a life of struggle and survival in abject poverty under the care of a  grandmother determined to overcome adversity .

Faith Jepchirchir, 13, hold a copy of The Standard in which her story was highlighted. [Courtesy]

Jepchirchir can now afford to walk  in shoes – thanks to Soles for African Child, a Nairobi-based NGO that has donated several pairs of shoes after reading about her plight.

When her story was highlighted, public-spirited people called in with offers to support Jepchirchir’s general well-being and education which seemed to be dependent on her aging grandmother’s meagre earnings from selling firewood.

The NGO donates shoes to underprivileged people in slums and other informal settlements.

The team said it was touched by Jepchirchir’s remarks in our story. She she had vowed to buy a Sh100 pair of shoes from her first salary as a medical doctor, a career she wants to pursue.

Speaking when The Standard team accompanied the NGO’s staff to  Kapsowar,  her grandmother and Jepchirchir’s head teacher Salina Mumol described her as a very hardworking, kind and focused girl.

“It is only shortage and problems at home that hold her self-esteem down,” said Mumol.

“When we read the story, it touched a place in our hearts,” said Mr Okoth, the NGO’s team leader.

They brought with them several pairs of shoes for Jepchirchir and her siblings, household items and food.

Well-wishers when they visited Jepchirchir at her home. [Courtesy]

Jepchirchir broke down in tears of joy saying that she could not believe how the motorbike  ride could have brought her  her such favours.

“I am grateful and may God bless you. I promise to work hard and make you and my grandmother proud,” she could only manage to say.