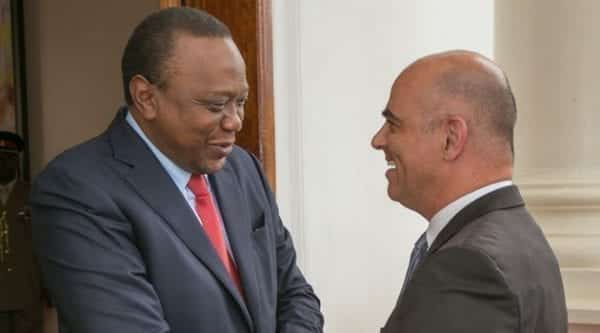 NAIROBI, Kenya, Jul 9 – Kenya has signed a mutual legal assistance framework with Switzerland for the return of assets acquired from proceeds of corruption and crime.

The new deal signed at State House, Nairobi on Monday is expected to enhance an existing Memorandum of Understanding on the repatriation of proceeds of graft.

Speaking after the signing of the legal assistance framework, the President of the Swiss Confederation Alain Berset, said the agreement will expedite the recovery of proceeds of crime stashed in his country.

“I’m extremely pleased that we’ve signed this framework. This framework will allow Switzerland to return financial assets that have been blocked for example in the Anglo-Leasing case,” he said during a joint media briefing after signing of the pact.

President Uhuru Kenyatta lauded the Swiss leader, saying he was confident the deal will, to a great extent, help his government’s commitment to root out corruption in Kenya.

“The framework outlines our commitment and action plan for recovering the proceeds of crime and corruption and ensure that illegally-acquired wealth held outside the country is repatriated to benefit the Kenyan people,” he remarked.

The two leaders said the harmonization of trade tariffs will boost trade between the two nations whose exponential potential has been limited by bottlenecks posed by tariffs.

“We’re keen on creating an environment where our small and medium enterprises are able to thrive so that we attract new investments, create jobs, and create wealth and prosperity for our people,” President Kenyatta said.

The meeting between Kenyatta and Berset comes at a time the volume of trade between the two nations has significantly increased, registering a double growth from 2015.

During the meeting, President Kenyatta also announced plans to open an embassy in Switzerland by October, in a move geared towards improving Kenya-Switzerland diplomatic relations.

He said the new embassy in Bern, the capital city of Switzerland, will facilitate tourists traveling to the country process requisite travel documents and improve tourist arrivals.

“The opening of that embassy will not only improve our people-to-people contact but will also enable more tourists from Switzerland travel to Kenya as well as establish a deepening of cultural and diplomatic ties,” President Kenyatta noted.

The visiting Swiss leader lauded the move taking note of the upscaling its diplomatic presence in the country by setting up a new embassy building in Gigiri in February this year.

“The aim of my visit is to find ways of making better use of our political and economic potential and further deepen relations and we have a tangible expression of Switzerland’s part with the new embassy building inaugurated in February,” Berset who is in the country for a two-day official visit said.

He is set to visit the Kakuma refugee camp in Turkana for which he commended Kenya’s humanitarian record.

The Swiss President said the huge numbers of refugees being hosted in the country were a clear statement of Kenya’s commitment to protecting the welfare of displaced persons.

He committed to continue rooting for support from the international community on the management of refugees.

“The refugee issue in not just a Kenyan issue but an issue for the international community and that is why we stand with Kenya in efforts to manage these issues,” President Berset said.

He also lauded Kenya for playing a leading role in international deliberations on trade, peace, and security.

“At a time the multilateral system is put under high pressure, Switzerland strongly believes in international cooperation, respect for international law, and culture for dialogue. We much appreciated the leading role Kenya is playing at the United Nations,” Berset said pledging closer collaboration with Kenya.

In his remarks, President Kenyatta pledged to work closely with President Berset in efforts to safeguard mutual interests.

“Our common interests like security and international cooperation are as relevant today as they were many decades ago when the Swiss helped us build the Utalii College. There’s a special pleasure in meeting to think through our options for defending and advancing our partnerships,” he said.