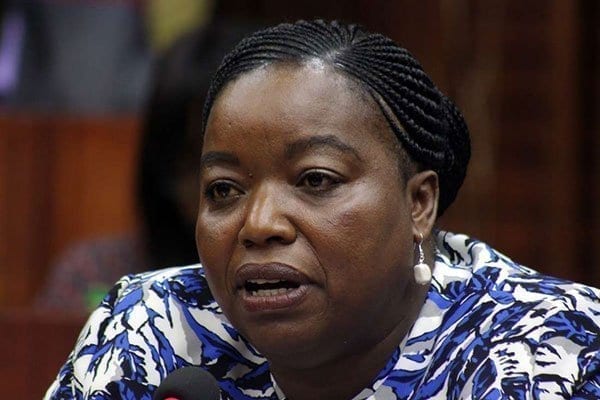 Foreign Affairs Cabinet Secretary Monica Juma is leading an advance team to the US ahead of President Uhuru Kenyatta’s meeting with his US counterpart Donald Trump on Monday.

Dr Juma is on Thursday evening expected to meet US Secretary of State Michael Pompeo in a series of meetings ahead of Kenyatta-Trump meeting.

Presidents Kenyatta and Trump will meet on Monday, and Dr Juma has been in the US since Wednesday to pave ground for her boss’s arrival.

Besides Mr Pompeo, whose meeting was planned for 9pm Kenyan time, the CS was also scheduled to meet Cyril Sartor, the special assistant to the president, and the US Senior director for Africa in the National Security Council, as well as Tibor Nagy, the assistant secretary of State for African affairs.

“The meeting between President Kenyatta and President Trump will reaffirm the longstanding relationship between the United States and Kenya as a cornerstone of peace and stability in Africa and the broader Indo-Pacific region,” Dr Juma said of the meeting early this month.

On Wednesday, Dr Juma, in preparation of President Kenyatta’s visit, addressed the American Society of Travel Agents hosted by Kenya Airways, the national carrier which will in October launch the Nairobi-New York direct flights.

President Kenyatta’s visit to the White House was confirmed early this month, with a statement from President Trump’s office saying that the meeting will discuss ways to broaden the “strategic partnership based on our shared democratic values and mutual interests.”

“The meeting between the two leaders will reaffirm the long-standing relationship between the US and Kenya as a cornerstone of peace and stability in Africa and the broader Indo-Pacific region,” the statement said.

It added: “President Trump and President Kenyatta will explore ways to bolster trade and investment between the two countries, while strengthening security cooperation.”

In the US, Dr Juma also hosted 30 ambassadors from African countries based in Washington for a meeting in which Kenya focused on the achievement of a united continent to boost its bargaining power—one of President Kenyatta’s key agenda in his second term.

Kenya has been pushing for the adoption of the Continental Free Trade agreement that goes with its plan to open its borders for trade following President Kenyatta’s December 12 order for Africans to be given visas on arrival.

Even as it pursues the US, Nairobi focused on intra-continent trade, and is planning to open 12 new diplomatic missions in Africa, to add to the current 20 in a trading bloc that accounted for 37.7 per cent of the Sh594.12 billion goods Kenya sold last year.

In an interview with the Nation, the CS said that President Kenyatta and his US counterpart will explore cooperation in trade, and counter-terrorism.

“We hope to begin discussions on post-Africa Growth Opportunities Act (Agoa) arrangements because we have seen a huge appetite in that direction,” Dr Juma said.

President Kenyatta is expected to jet back immediately after the meeting with President Trump to host United Kingdom prime minister Theresa May on August 30.

The meeting with PM May, Dr Juma said, will focus on bilateral relations with focus on trade, security and a joint fight against corruption.

The president is then expected to attend the Forum for China-Africa Cooperation to be addressed by Chinese president Xi Jingping on September 3.

VIDEO: Kenyan pastor says there is no Coronavirus

School ‘pays dowry’ to save girls from childhood marriage

A Kenyan man has passed away in Wales, UK