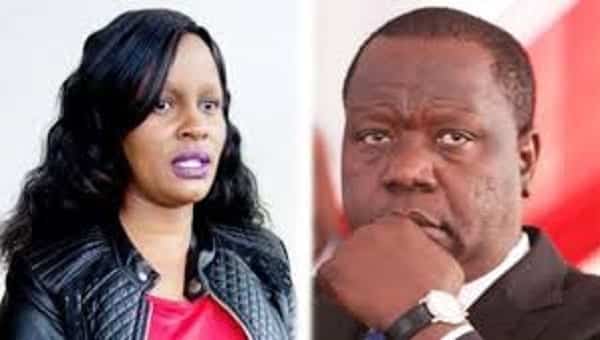 A female guard, who was sacked for making Interior Cabinet Secretary Fred Matiang’i queue for a security check at Jomo Kenyatta International Airport, has been allowed access to footage of the incident.

The Kenya Airports Authority (KAA) on Thursday agreed to serve Daizy Cherogony with the CCTV footage within two weeks.

The KAA told Justice Nzioki wa Makau, of the Employment and Labour Relations Court in Nyeri County, that it would serve Ms Cherogony with the electronic evidence before the hearing of the case kicks off.

The guard sued the authority for firing her on grounds of misconduct, for having the CS queue for a security check like other passengers at the international entry point.

Through lawyer Alex Bismana, the 38-year-old woman demanded the footage since the KAA has referred to it in its defence documents.

“We want all the footage covering the events of April 6, 2017, showing the time of arrival and departure of Mr Matiang’i, which your company, through several witness statements filed in court, claims to have played during the disciplinary hearing of our client on April 19, 2017,” Mr Bismana said in a letter to KAA.

He noted that the footage is crucial because Ms Cherogony was later “unlawfully dismissed” on the basis of the information in the video.

Ms Cherogony, in her court documents, indicated that Mr Matiang’i wanted special treatment though it had been raining and other passengers had been complaining as the queue kept growing longer.

Citing the security manual, she said cabinet secretaries queue like other passengers unless they have special passes, which require special arrangements before their arrival.

“Mr Matiang’i never had special passes, [and neither did] the people around him, so I could not allow him into the airport without clearance at the screening checkpoint,” said Ms Cherogony, who is seeking Sh41 million compensation for wrongful dismissal.

In quick rejoinder, the KAA, through lawyer Lorraine Oyombe, said the complainant ignored the CS when he arrived that evening and presented himself at the glass door.

Ms Oyombe said the CS was delayed for 24 minutes outside the terminal and that he almost missed his flight to Kisumu.

She said that upon investigation, Ms Cherogony’s was found in breach of the corporation’s Human Resources Manual so disciplinary action was recommended as she handled Mr Matiang’i negligently and recklessly.

“The claimant was issued with a show cause letter. She was informed that it had been reported that she had uttered the words ‘I do not care who you are and you have to queue like all other passengers’, even after the cabinet secretary introduced himself,” Ms Oyombe said in the memorandum of defence.

She further said the guard was taken through the disciplinary process, during with the CCTV footage for the material date was produced.

“The footage showed the claimant ignored the CS, who was right in front of her, and instead beckoned to passengers who were behind him. She said she was concentrating on other passengers thus she did not look up,” added the lawyer.

The case will be mentioned on November 14, 2014 for directions on the hearing.

[PHOTOS] Shows of might as NASA, Jubilee leaders check into Bomas

Unity West In Tatu City: The Perfect Environment To Own A Home