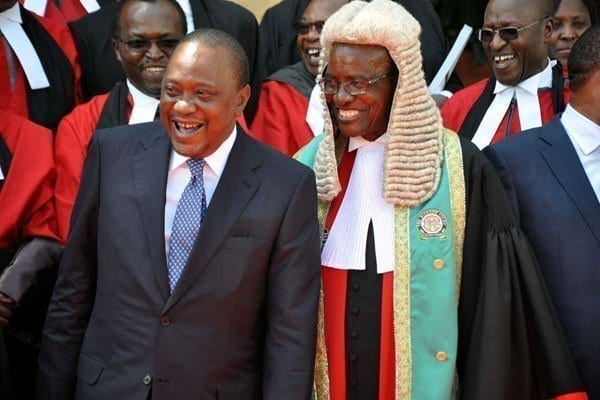 President Uhuru Kenyatta is to meet Chief Justice David Maraga in what could end a lengthy stalemate between the two arms of government they represent.

The nomination of Court of Appeal judge Justice Mohammed Warsame to the Judicial Service Commission (JSC) is expected to feature prominently at the meeting, after months of an impasse that has played out in public between the Executive and the Judiciary.

But the Nation could not confirm reports that the meeting will take place today, since the President’s return from China has not been confirmed.

The meeting suggests that the Judiciary could be looking for an amicable end to its wars with the Executive and the Legislature, since it comes just days after JSC members had a joint retreat with Parliament’s Justice and Legal Affairs Committee in Mombasa.

During the retreat, they discussed the reduced funding for the Judiciary and Justice Warsame. Parliament had insisted on vetting the judge before he could be gazetted as a JSC member but in July, High Court judge Enoch Chacha Mwita ruled that the legislators’ move was illegal. At the time, the Law Society of Kenya had sued to stop the MPs from vetting Justice Warsame.

Appellate Court judges voted for Justice Warsame to represent them in the JSC, but MPs insisted on vetting him first.

JSC member Tom Ojienda on Wednesday told the Nation that the parliamentary committee members had agreed to push for the reinstatement of the funds slashed from the Judiciary’s allocation for this financial year.

The Judiciary’s spending for the 2018/2019 financial year was capped at Sh17.3 billion before Parliament slashed it further to Sh14.5 billion, leaving only Sh50 million for development.

“I think the talks were fairly positive and there have been engagements. We justified to them why we need the Sh1.8 billion to deal with pending court projects. The committee agreed to push the agenda to Parliament. There is also engagement with the Executive, but we are looking forward to a more formal approach,” Prof Ojienda said.

“What happened during last year’s elections of course laid a basis for some of these actions, there is no doubt about that. But it’s our job as a commission to bridge this gap. In under two weeks the commission should be fully operational,” he added.

Being at the centre of a power struggle between the Judiciary and Executive is not new to Justice Warsame. He was among the six JSC commissioners suspended in 2013 following a petition passed in the National Assembly.