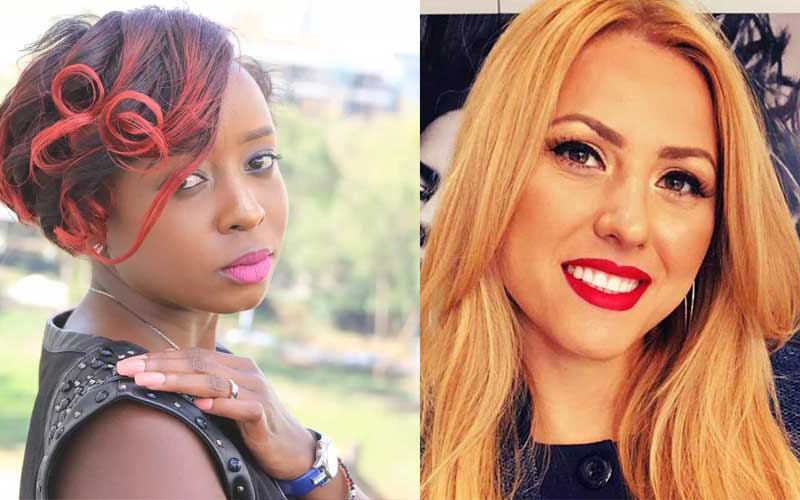 Lately, the world has been treated to breaking news about news presenters. And what a shock and tale with a twist it is.

Whether it is a celebrated TV host getting pregnant, being divorced, hooking up with a politician or even being involved in legal matters, the TV girl has become a news magnet.

They are as attractive as they come – like it were the days when men used to watch TV waiting for the weather forecast moment, thanks to the beauty and allure of the TV weather girl.

People get obsessed with TV girls. Men want to date them and women want to be them. Others find them dangerous, especially for those who pursue investigative journalism.

Whichever the case, it is becoming clear that the job of a TV girl might be one of the most troublesome in our days.

As the drama on Jacque Maribe and her court appearance in connection with the murder or of Monica Kimani went on this week – we were treated to yet another murder story involving yet another TV girl.

The news was on Viktoria Marinova – a celebrated Bulgarian television reporter who become the third journalist to be murdered in the European Union in the last year, and the fourth since the start of 2017.

According to USA Today, the 30-year-old’s body was found dumped near the Danube River in the town of Ruse, northern Bulgaria, on Saturday. Police said she had been beaten, raped and strangled.

It is not known if Marinova’s murder is linked to her journalism work. Investigators are still trying to trace potential witnesses and establish a motive for her killing.

However, Bulgarian media reported that Marinova recently interviewed Romanian journalists who were investigating politicians and businessmen for alleged corruption of EU funds.

“It is about rape and murder,” Interior Minister Mladen Marinov said, apparently concluding there was no evidence to suggest the killing was linked to Marinova’s work.

According to USA Today, Marinova worked for a small local TV station called TVN where she presented two investigative programs.

The Organization for Security and Cooperation in Europe, an intergovernmental body, called for a “thorough investigation” of her rape and murder, noting “a trend of increased attacks against female journalists.”

The online newspaper reports that Maltese investigative journalist Daphne Caruana Galizia was killed in a car bomb in October.

She had worked on the Panama Papers – leaked documents that revealed financial information about the offshore accounts of high-profile officials.

Slovakian investigative journalist Jan Kuciak and his girlfriend were shot to death in February. Kuciak was investigating tax fraud.

Swedish freelance journalist Kim Wall was murdered in a gruesome case in Denmark last year by Danish inventor Peter Madsen. Wall was killed and mutilated after boarding Madsen’s submarine to do an interview.

Frans Timmermans, vice president of the EU’s executive branch, tweeted: “Again a courageous journalist falls in the fight for truth and against corruption. Those responsible should be brought to justice immediately by the Bulgarian authorities.”

Bulgaria ranked 111 out of 180 countries in the Reporters Without Borders world press freedom index this year. That’s lower than any other member of the EU.

Worldwide, at least 48 journalists have been killed doing their work in 2018, according to the Committee to Protect Journalists, an organisation that promotes press freedom.

Closer home, the media has been treated to stories of TV girls most so negative that one would conclude that the profession is demonised. The latest is on TV journalist Jacque Maribe, probably the biggest crime story involving a local TV personality.

Sometimes back, Lilian Muli became the talk of town after she divorced hubby Kanene after their fairy tale wedding. Then there was another TV star who was said to have ‘stolen’ someone’s husband in a dramatic wedding that saw the pair change venues.

Two other TV girl who were dating politicians reported to have suffered shame after their cars and houses were repossessed – as they were driving to work. The stories goes on and on.

Is the TV girl a vulnerable lot?

While some people argue that being in the public eye, just like celebrities, TV girls are prone to public scrutiny, others would say that some of them – who have been making headlines for the wrong reasons – are the architects of their own troubles.

“I for example know of a TV girl who was in trouble with a city lawyer’s wife as she was dating the man. He even ended up buying her a car and a house before his wife showed up at the TV presenters office to warn her that she was breaking her family,” says a source within close media circles who declined to be named.

“Still, some politicians and other prominent personalities think TV girls are flowers and objects of desire. The fact that they have their contacts and can work closely with them in pretence that everything is in the line of duty tells you a lot about what sometimes goes behind the scene. What we are treated to on those (gossip) blogs is just the tip of the iceberg,” the source concludes.